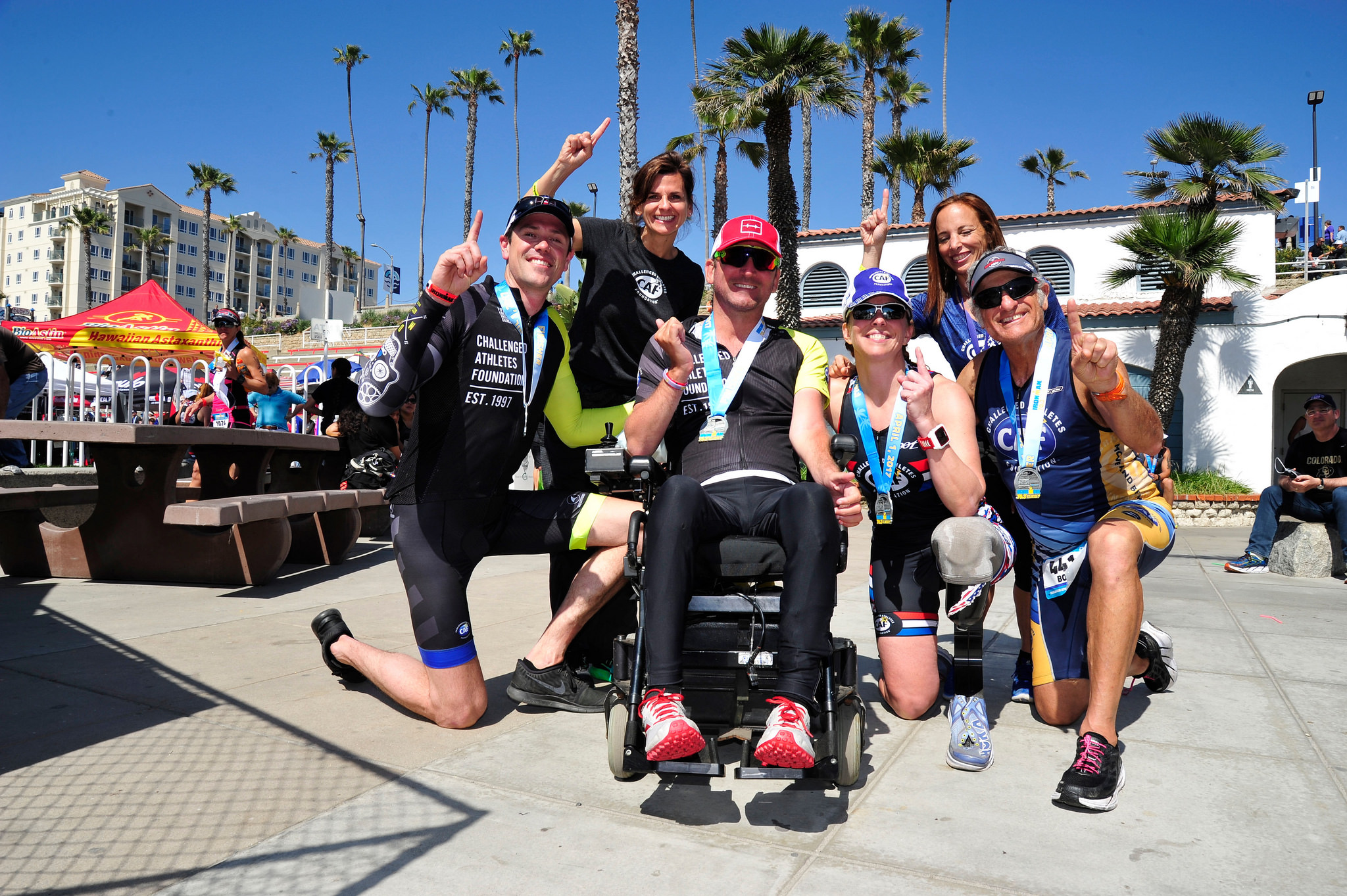 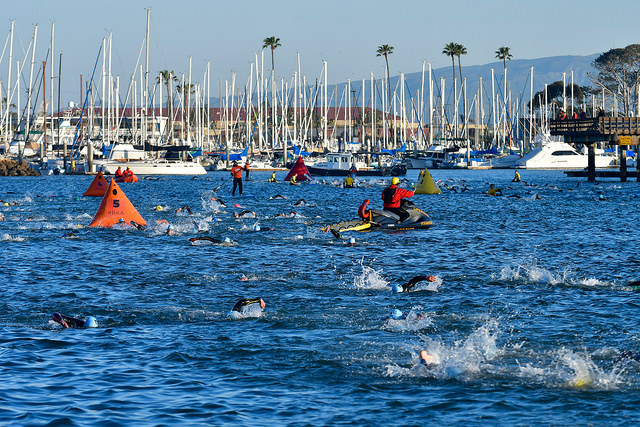 On April 7, 2018, over 5,000 athletes will compete in this half IRONMAN distance triathlon “1.2-mile swim, 56-mile bike and 13.1-mile run” pushing themselves to the limit and committing to promised goals.

CAF’s Operation Rebound program (OR) has partnered with IRONMAN for the last 10 years as the sole charity partner and race beneficiary, working together to strengthen the mental and physical well-being of veterans, military personnel and first responders with permanent physical injuries. OR athletes compete every year in this event, either on a relay team or as individuals, reigniting their competitive spirit and finding community within their team of athletes and CAF fundraisers also competing. 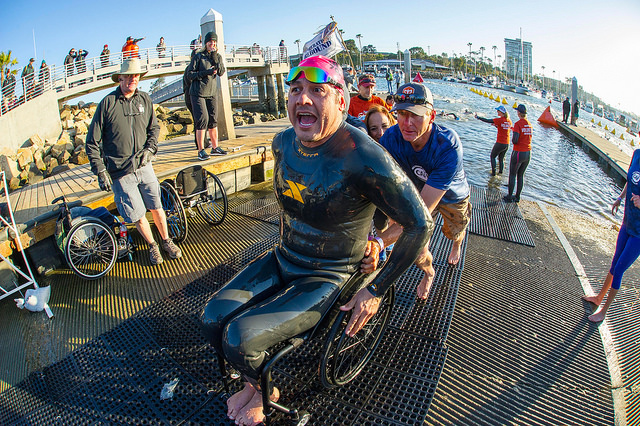 Amongst those athletes competing will be 15 CAF athletes – 12 of whom served our country honorably in the military – and all of whom embody the resilient spirit of an athlete.

There is no shortage of incredible comeback stories that begin here.

Former CNN Anchor, Miles O’Brien, now science correspondent for the PBS NewsHour, who lost his arm nearly four years ago, is traveling in from Boston to compete and raise funds for OR alongside his Navy Lieutenant son. Triathlon and military icon Dave Rozelle and Evan Morgan, both who lost limbs while deployed in Iraq, are back after competing 10 years ago in Oceanside 70.3. Patty Collins is the current world record holder of the 70.3 distance triathlon for female amputees and is ready to defend her title.

Keep reading to hear about the journeys of 15 CAF athletes who all have their sights set on the finish line of IRONMAN 70.3.

Interested in racing? There are spots available on our team!

There are still spaces left to fundraise and compete alongside those who fought for our country on Team Operation Rebound. Join these incredible athletes at the home of triathlon and kick off your season with a race to remember. Learn More 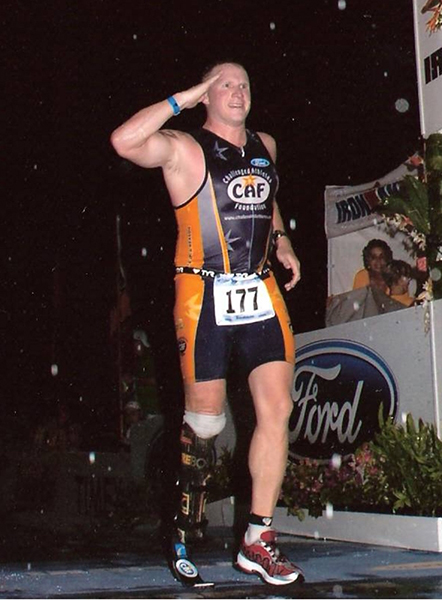 Dave Rozelle is an icon, mentor and inspirational figure for American service members injured in recent conflicts. Dave lost his leg when a land mine exploded under his Humvee while on deployment in Iraq. A year to the date of his accident, Dave assumed command of his unit in Iraq, becoming the first service member to return to combat command. Dave was the inspiration to develop CAF’s Operation Rebound program and continues to push the limits in the world of triathlon at IRONMAN events and beyond. 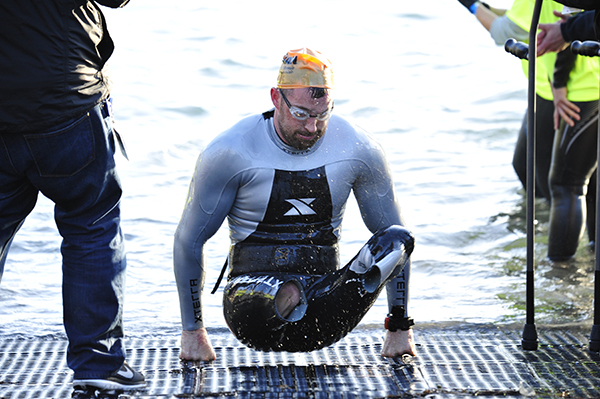 While stationed in Iraq on his second tour, Evan’s vehicle was struck by an IED and as a result, he lost his right leg above the knee, left leg below the knee and sight in one eye. While in recovery at Brooke Army Medical Center in Texas, Evan became a regular at the gym. He was active prior to the injury, but now activity became an even more critical part of his life. Evan became interested in triathlon and competed in CAF’s San Diego Triathlon Challenge and IRONMAN 70.3 Oceanside in 2008 and 2009, hoping to encourage others to live an active lifestyle. 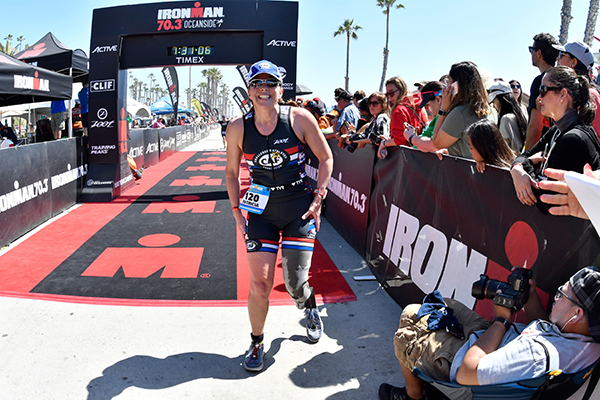 After returning home from deployment in Iraq, Patty was hit by a car while cycling to work. The injuries she sustained led to the amputation of her leg below the knee. Patty began running and cycling, turning her passion for sports into a career and serving as a mentor to many. Patty is the current world record holder of the 70.3 distance triathlon for female amputees. 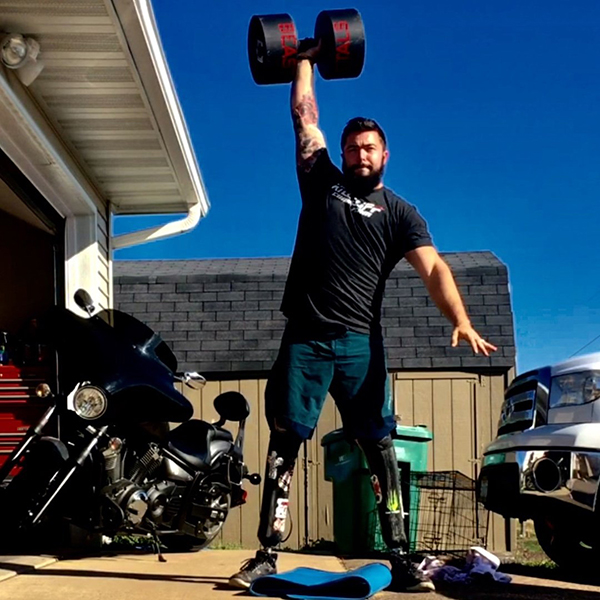 Upon completion of his time in the Air Force, Logan became a firefighter, and then three years later, was hit by a train and lost both of his feet on his 21st birthday. Within two weeks of his accident, Logan was released from the hospital and back in the gym that same day. He now competes in CrossFit and is a certified instructor, with goals of competing in the Paralympic games as a bobsledder. 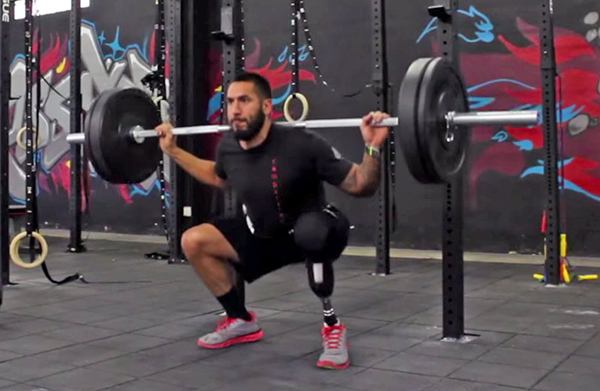 On a combat tour in Iraq with the U.S. Army, Mike sustained a severe injury to his right leg when two IEDs simultaneously detonated beneath his truck. Mike decided to amputate his leg in order to lead an active lifestyle and hasn’t looked back since. Mike now works at the MLB network in New York and remains active in numerous sports including CrossFit and Para equestrian. 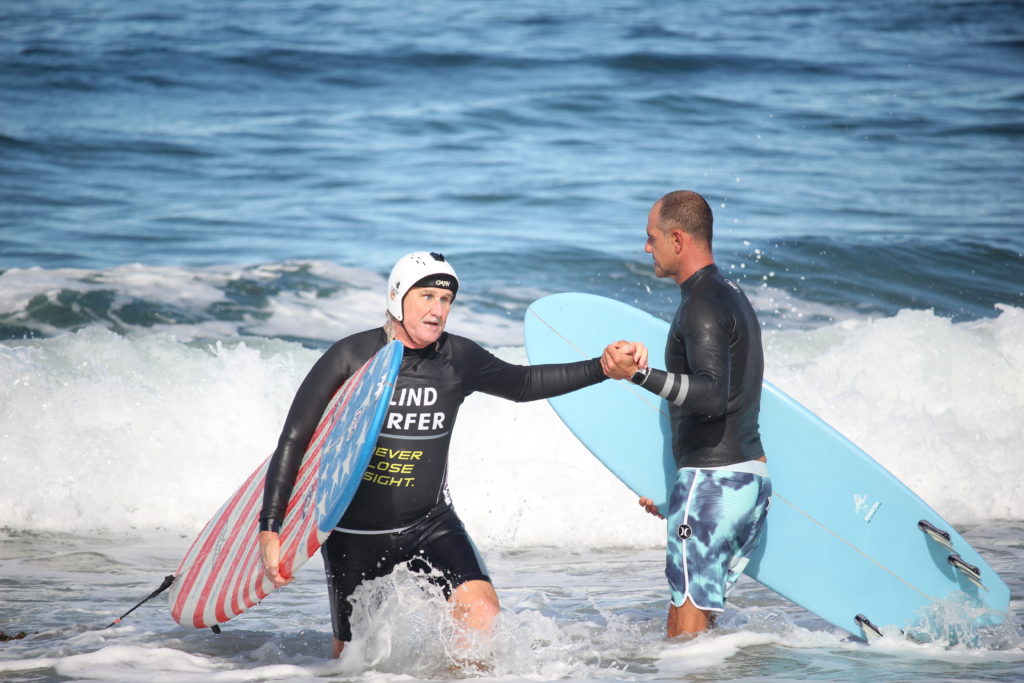 When Scott was 20-years-old, he joined the U.S. Navy and served honorably for seven years. While working at a convenience store, Scott was shot in the head during a robbery and lost both of his eyes and sense of smell. In 2007, Scott began waterskiing again; this time as a visually impaired athlete. With the help of CAF’s Operation Rebound program, he has competed in multiple IRONMAN races, waterski events, and was the sole visually impaired athlete on Team USA at the ISA World Adaptive Surfing Championship presented by Team CAF. 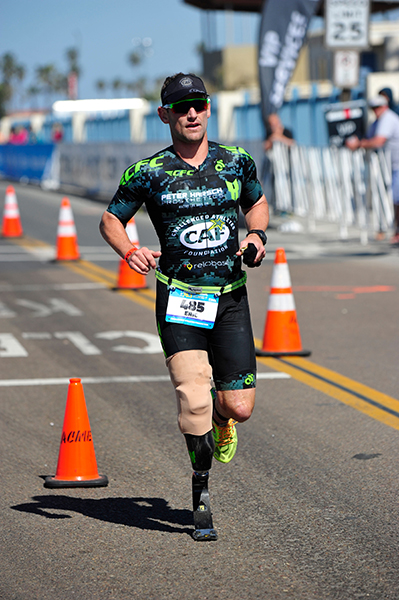 Eric excelled in both baseball and football throughout high school and went on to major in Mechanical Engineering at the U.S Naval Academy. Following graduation and Marine Corps training, Eric deployed three times to the Middle East. On his third deployment to Afghanistan, Eric was working with Afghan soldiers and stepped on an IED, suffering the loss of his right leg below the knee in the explosion. Eric used surfing as part of his recovery and from there, started competing in triathlon. In 2013, Eric completed the IRONMAN World Championships in Kona, HI and has gone on to complete a number of full and 70.3 IRONMAN events since that time. 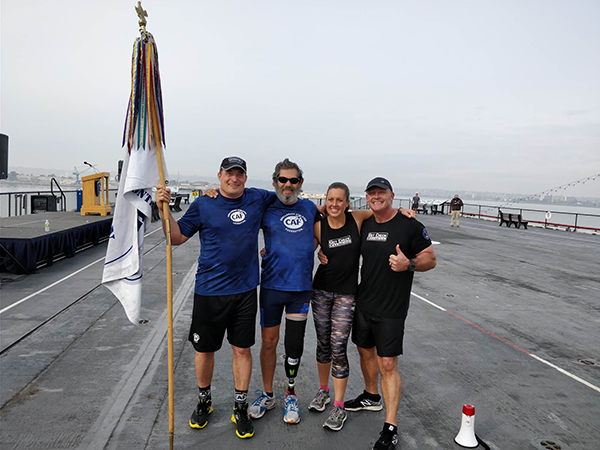 Raul enlisted in the U.S. Army during the Vietnam War to serve his adopted country. He served as a medic and saved a number of lives, earning him a Bronze Star for valor. Upon returning from Vietnam, Raul helped start the San Diego Running Club and became an avid marathon runner. In 2012, Raul’s leg was left paralyzed during a surgical mishap and finally in January of 2017, he elected to have his leg amputated, regaining his active lifestyle of cycling and running. 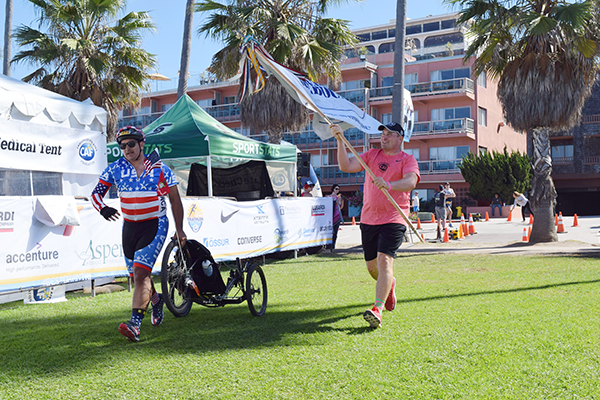 Eric is a U.S. Marine Corps veteran who was injured in a motorcycle accident in 2015. His hand was paralyzed as well as portions of his right arm and his spine has been fused to protect two broken vertebrae. Eric’s recent involvement with CAF has helped bring him out of depression and weight gain, and into the world of triathlon. He will be cycling in his first IRONMAN event at Oceanside 70.3. 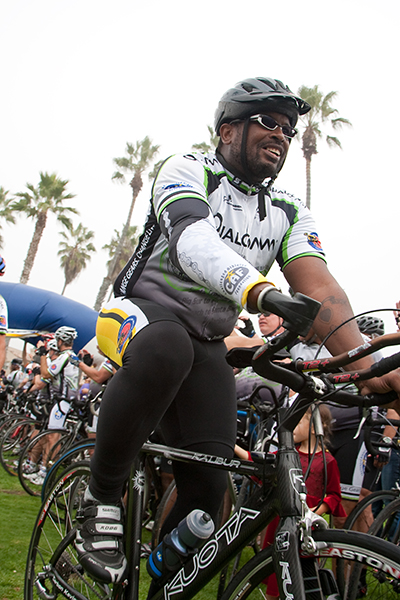 Anthony took a direct hit from a rocket-propelled grenade while on deployment in Iraq. He was put in a body bag before a nurse noticed air bubbles coming up through the blood. Anthony was in a coma for 62 days and only recently regained most of his memory. He lost his right arm below the elbow and underwent dozens of surgeries, learning to write and throw a ball to his child with his left hand. Anthony later started competing in triathlons, did CAF’s 620-mile Million Dollar Challenge ride and earned his black belt in martial arts, opening his own studio. He is currently training for the U.S. Paralympic Tae Kwan Do team that will debut at the 2020 Tokyo Paralympics. 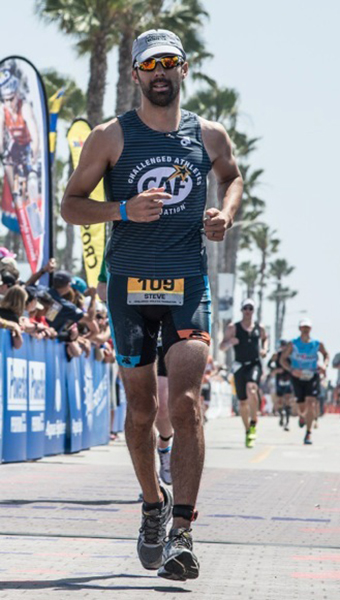 While serving in the Marine Corps, Steve was diagnosed with Retinitis Pigmentosa, a condition that rapidly deteriorated his ability to see. Steve recently graduated college with a degree in Psychology, specializing in Marriage and Family therapy along with Sports psychology. He now helps fellow veterans who have disabilities transition back to civilian life. In 2014, Steve completed his first IRONMAN event and in both 2015 and 2017, he was a finisher at the IRONMAN World Championships in Kona, HI. 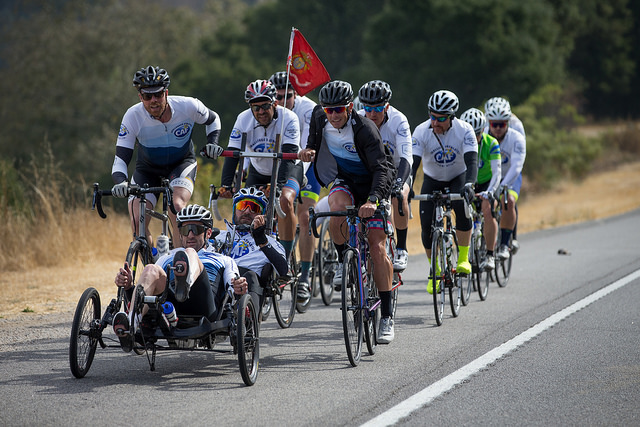 Marine Corps Reservist, Lance Weir, was dislodging a canoe in a river, when afterwards, he leaned headfirst into the water to retrieve his baseball cap. His head hit a submerged rock, shattering his C5 vertebrae and he became a quadriplegic. 17 years after his injury, CAF’s Operation Rebound encouraged Lance to enrich his life through sport. Over the years, he has earned 8 gold medals in Air Rifle at both the Marine Corps Trials and the Warrior Games. In 2017, Lance and his pilot became the first tandem hand cycle team to compete in an IRONMAN event at Oceanside 70.3. 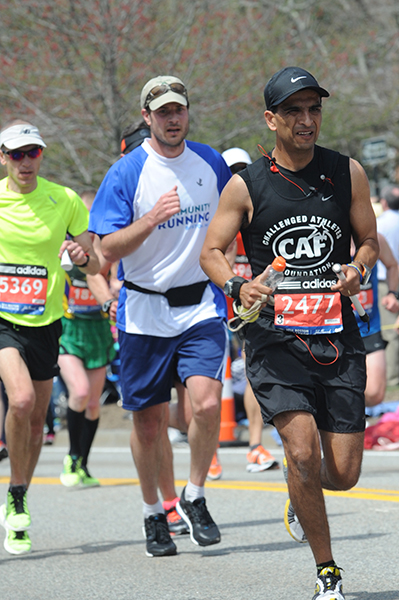 About 20 years ago, Adrian lost his vision due to the genetic condition Leber’s Hereditary Optic Neuropathy. With his unending determination, Adrian has since completed 36 marathons. He has recently taken up a new passion for the sport of triathlon after competing in the Aspen Medical Products San Diego Triathlon Challenge. He is hooked on the sport and plans to complete a full IRONMANÂ® by 2018 with the help of his recently granted tandem bicycle. 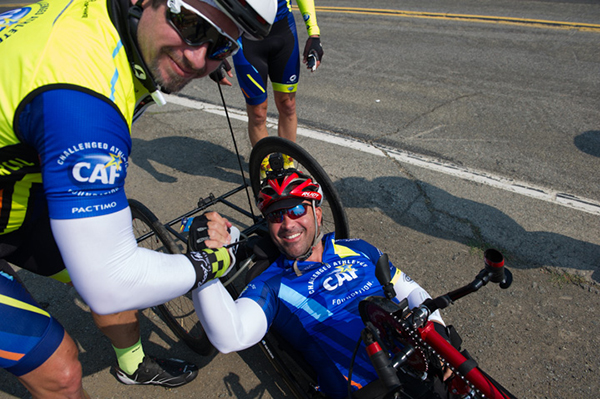 Just months after discovering a passion for triathlon, Rob became a paraplegic in a terrible training crash on his bike. Despite many dark days of recovery, he was determined to get back to the world of triathlon. Having a strong community in sport like CAF has made all the difference for Rob and he is ready to tackle Oceanside 70.3. 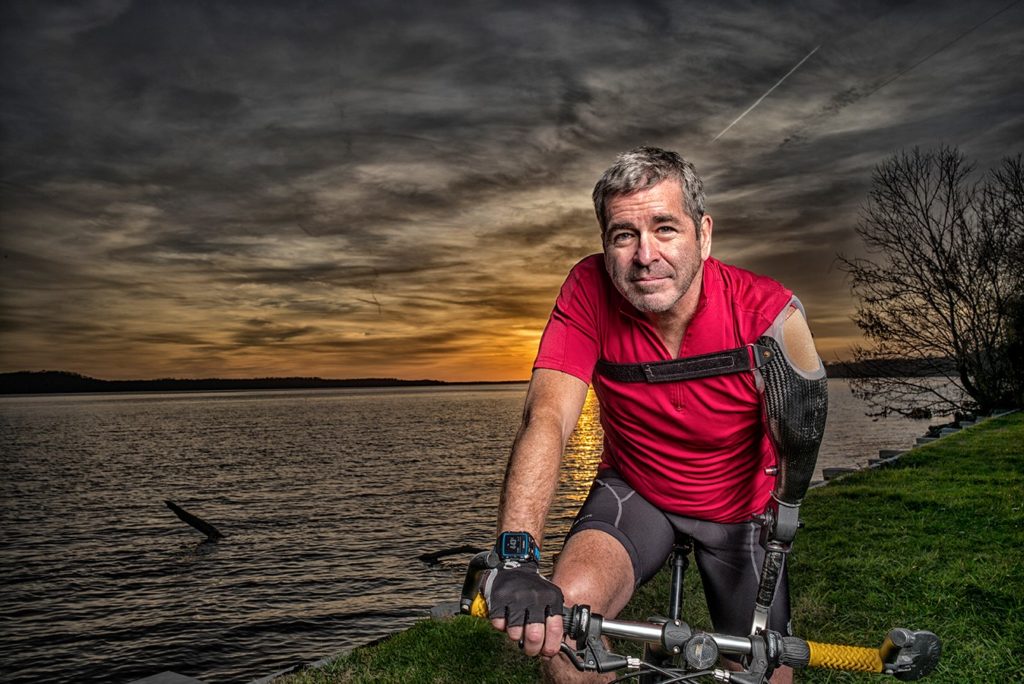 Miles O’Brien, award winning science correspondent for the PBS NewsHour and former CNN anchor, is nearly four years into his new life as an amputee and will be coming from Boston to Oceanside to compete with his son on behalf of CAF. Miles lost his arm due to compartment syndrome after a case of TV gear fell onto his forearm.

“I want as many people as possible to join me in this challenge. It’s an opportunity to understand what it means to be resilient; to conquer life despite a disability. None of us can do that alone. We need help to achieve that goal and CAF provides it.”

Miles’ journey to Oceanside in his own words:

“Since my accident, I’ve worked hard to stay in the game athletically. It has had its challenges. On one of my first one-armed runs, I stumbled on an uneven sidewalk and tried to break my fall with my missing arm. Instead, I landed flat on my face, breaking my nose. I often think about what Winston Churchill said: “If you’re going through hell, keep going”. And that is what I have been doing. I’ve run two marathons, one sprint triathlon and have ridden my bike 300 miles across Michigan over one summer weekend four times now.

When my Navy Lieutenant son challenged me to join him in competing at Oceanside 70.3, I knew I had found the main event that I’d been looking for since my amputation. I know first-hand what great work CAF does and I want to do whatever I can to help their important mission. So, I told my son “game on” and got busy swimming, biking, running, and fundraising