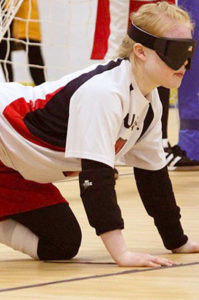 Marybai moved to the Utah in the 6th grade, where she was first introduced to goalball. Initially Marybai was hesitant about goalball, but after participating in her first tournament she experienced a change of heart after witnessing the team comradery and the excitement of the goalball community. From then on Marybai was powered by a hunger to learn, play and improve. This dedication led her to a Youth National Championship and an invitation to her first U.S.A. training camp. In 2014, she was named to the U.S. team and competed as the youngest member of team U.S.A. at the 2014 world championships. Marybai credits goalball with transforming her from an insecure, indecisive 6th grader to a confident, highly capable college freshman.