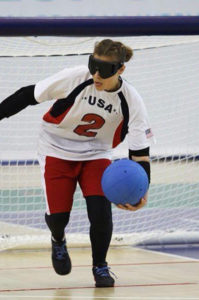 Amanda Dennis was born with a rare visual impairment called Aniridia. Her first memory of playing a sport was playing soccer as a kid, which she doesn’t remember especially fondly as her limited vision held her back from contributing much to the team. Her outlook on sports changed when at age 9 she went to a camp hosted by Blaze Sports America. After meeting Paralympic players and role models, Amanda was hooked on goalball. She began competing in tournaments all around the country at age 10 and at 15 she competed in her first youth international competition. At just 18 years old, she made the U.S. Paralympic team and competed in the 2012 London Games. Amanda continues to vigorously train with her team and explains that goalball has made her who she is today.