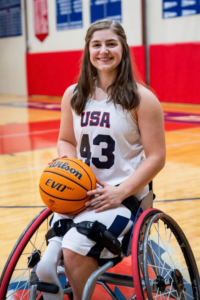 At ten years old, Bailey had right knee pain that is often associated with sport activity or injury. She was diagnosed with Osteosarcoma, a rare and aggressive form of bone cancer.

Treatment began immediately and included harsh chemotherapy and an amputation, called a rotationplasty. This amputation is considered “non conventional” as the tumor in her femur and knee were removed, the bottom portion of the leg was rotated 180 degrees and reattached to function as her knee.

She continued chemo and began rehab. With scans indicating that she was NED (No Evidence of Disease) she returned to playing basketball. After two years of playing upright ball, Bailey tried wheelchair basketball and has not looked back.