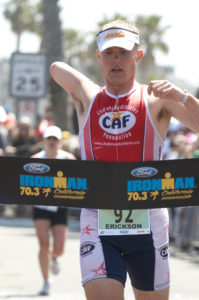 Brandon joined the North Dakota National Guard in 1999. In 2003, his unit was mobilized in support of Operation Iraqi Freedom while he was attending the University of North Dakota. Brandon served as a gunner on a Humvee providing security for convoys between Balad and Ar Ramadi. On July 22, 2003 his convoy was ambushed and Brandon sustained injuries to his right arm that resulted in an amputation. He received a bronze star and purple heart for his combat service.

Brandon’s wife Dana is his biggest supporter, saying “his strong character attributes of hard work and determination carried him through his rehabilitation plan and enabled him to return to university. Brandon never gave up on himself, he only strived further to become a better person. He was granted a second chance at life, and he was determined to make the most of it.” Brandon became involved with CAF in January 2008 and completed in his first Ironman 70.3 with Team Operation Rebound in February. Brandon has since completed a number of half-distance and Olympic distance triathlons. He was also a top finisher in 2009 ITU World Triathlon Championships.

“CAF has provided me an opportunity to excel in a sport I once thought would not be possible for me to do. CAF Operation Rebound’s support given my fellow injured troops and me has been live changing.” -Brandon Erickson

Your generosity and support has given Brandon the opportunity to pursue his dream of becoming a highly competitive triathlete.