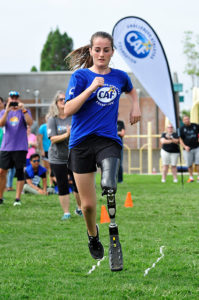 At ten years old, Breezy was diagnosed with Osteosarcoma, an aggressive form of bone cancer on her left thigh. Inspired by CAF Ambassador Sarah Reinertsen, Breezy made the brave decision to amputate her leg to save her life. Breezy’s positive attitude and resilience have inspired many and she is determined to be a role model for other kids and adults who are battling cancer. An avid athlete, she has completed 6 triathlons, hiked Half Dome and enjoys CrossFit. CAF has supported her along the way with grants for her running prosthetic, training expenses, surfing instruction and competition travel. Breezy has an amazing voice and has performed at many CAF and public events. She shared the stage with the band Switchfoot several times at their annual BRO-AM surf event and at the Masonic in San Francisco. She has won awards like the Challenged Athlete of the Year at the 2014 Endurance Live Awards in San Diego, CA and even has given a TED Talk in La Jolla. Breezy continuously inspires and mentors others. With the incredible support of her family, local community, and CAF, Breezy has overcome her diagnosis through the power of sport.

Breezy Bochenek Sings CAF Version of “Part of Your World”