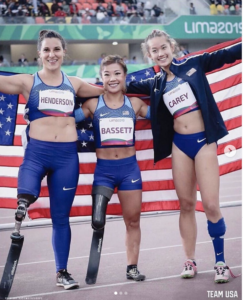 Catherine “Annie” Carey was born in china with a severe club foot. After being chosen by her forever family, she was brought to the United States where she underwent serial casting and surgery ultimately resulting in correction. However, this correction resulted in drop foot along with nerve damage. Early on it was determined that for Annie to have a healthy and physically active lifestyle, she would have to wear an AFO (Ankle Foot Orthosis) on a daily basis.

At the age of seven, Annie watched the London Olympics and saw Oscar Pistorius run. At this point, she announced that she was going to go to the Olympics and win a gold medal, thus starting her journey in adaptive sports. Within a few short months she started the Tri Club at the Treasure Valley YMCA in Boise with One Arm Willie as her Coach. She shortly after received her first CAF grant. Since her start with the Tri Club, Annie has gone on to compete in multiple competitions in triathlon, track & field and swimming, holding multiple records on each.

In the years that Annie has been competing, she has been both bound and determined to make it to the Paralympics, either in track & field or swimming. Annie was recently introduced to the sport of Paratriathlon which she is starting to train for.

Some of her past career highlights include winning bronze in the 100m at the 2019 World Para Athletics Junior Championships, and winning 1st in long jump and 2nd in both the 100m and the 200m at the 2019 Arizona Grand Prix.

Underneath Annie’s quiet personality is a fierce competitor who is hardworking, dedicated, and determined. “In 2020 I want to continue to train and compete in both Track & Field and Para Nordic Skiing, as well as attend trials for Track & Field, with intentions of making the US Team and ultimately Tokyo 2020” – Annie Carey