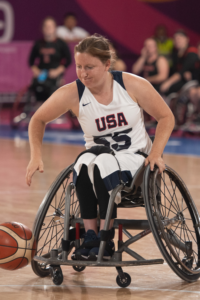 Courtney Ryan took her first steps on the soccer field which she came to regard as her second home growing up. Courtney started playing soccer from the young age of four and went on to become a collegiate soccer player. In 2010 when she was 19 years old, elite MSU Denver soccer player Courtney Ryan was slide tackled when a blood clot burst causing some of the nerves to detach from her spinal cord, leaving her paralyzed from the waist down.

Courtney is 1 of 6 CAF Wheelchair Basketball Training Zone elite coaches featured in the new content series to help athletes learn, train and play anytime, anywhere. Next summer, she will represent Team USA at the 2021 Paralympic Games.