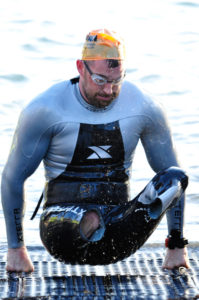 On January 1, 2005 while stationed in Al Qaim, Iraq, on his second tour, Evan’s vehicle was struck by an Improvised Explosive Device (IED). The 21- year-old U.S. Marine Corporal was the only one injured by the blast. As a result, Evan lost his right leg above the knee, his left leg below the knee and his sight in one eye. He spent three months at the National Naval Medical Center in Bethesda, MD. He was then transferred to the Brooke Army Medical Center (BAMC) in San Antonio, TX, as an outpatient.

Evan began to flourish while at BAMC. Shortly after arriving he began walking using Ossur’s Rheo-Knee, and married to the “love of his life” Jillian. He became a regular at the gym and even began running. Something had changed in Evan. He was active prior to the injury, but now activity became a necessary part of his life. “You can’t change the past,” said Evan, “so you do what you can with what you’ve been given.”

In 2006, Evan did the swim portion of the San Diego Triathlon Challenge (SDTC) and 2008 and 2009 he completed the Ironman 70.3 California . He hopes that by being active himself, he can be a positive influence and engage others to live active lifestyles. To top his list of accomplishments, Evan recently became a father with the birth of a beautiful baby girl.

“CAF’s Operation Rebound has given me the tools and resources I needed to help get my life back on track.” -Evan Morgan

The generosity of supporters like you has given Evan the opportunity to overcome his injuries through sport and motivate others to follow his lead.