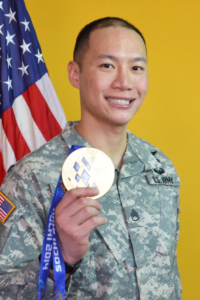 On March 21, 2009, Army veteran Jen Lee lost his left leg above-the-knee in a motorcycle accident. In 2010, Jen was introduced to CAF Operation Rebound while rehabilitating at the Center for the Intrepid in San Antonio, TX and found sport again.

Since then, CAF Operation Rebound has supported Jen’s sled hockey equipment and competition needs. Jen competed on the U.S. Paralympic Sled Hockey team in the Sochi and Pyeonchang games – winning gold at both – and is currently fighting for gold in Beijing.