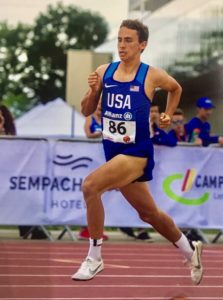 A senior in high school, Joel Gomez was born with blue cone monochromacy, a rare genetic disease affecting the retina, which leaves him legally blind. As a child, he played soccer, however, as the game became more competitive, he found it difficult to track the ball with his vision, so at age 9, he took his speed to the track. As an 8th grader, he broke the 5:00 minute mile barrier. When a USATF official became aware of Joel’s talent for running and visual impairment, he recommended that Joel get classified for the Team USA Track & Field Paralympic Team.

Gomez won the ambulatory 400m race at the 2019 CIF State Track & Field Championship and was named a High School All-American by the U.S. Olympic and Paralympic Committee. He then went on to compete for Team USA in the summer of 2019 at the Junior World Para Athletics Championship, winning Gold in the 400m and 1500m events, and the Parapan American Games, winning Silver in the 1500m event. He was nominated and competed at the World Para Athletics Championship held in Dubai.

Joel’s future goals include competing in the Tokyo 2021 Paralympics and breaking the sub-four-minute mile barrier. Not only is he an incredible athlete, but he’s also an accomplished musician with a strong message to inspire others so they can overcome their challenges. Joel is honored that The Challenged Athletes Foundation supports his athletic goal of standing on the Olympic podium.