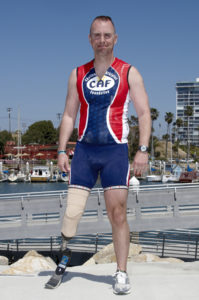 John Blue is a career soldier with more than 25 years of active duty service in the U.S. Army. In 2006, he deployed to Iraq for a year-long tour. On January 27, 2007, the armored vehicle John was riding in was struck by an IED. The blast removed most of John’s right foot and caused extensive injuries to his right leg below the knee. Upon evacuation, John was rushed to surgery at an Army field hospital and then further evacuated to Germany before being sent to Walter Reed for additional surgeries and rehabilitation.

While at Walter Reed, John was given surgery options for what he had left of his leg and foot. He decided on a below-the-knee amputation because it gave him the best option to live an active lifestyle. Ninety-one days post- injury, John started walking on a prosthetic leg and within four months he began to run. John demanded the best from himself and with his doctor’s approval he increased his therapy to twice-daily seven days a week. On October 1, 2007, John returned to full-duty as a Battalion Sergeant Major.

Within 12 months of injury, John participated in the Extremity Games, the Endeavor Games, two Urbanathlons and has since completed a number of triathlons and marathons.

“Even though you go through a traumatic event like losing a limb, you can still achieve any goal that you set your mind to. Nothing can stop you if you put your mind to it and put in the training time.”-John Blue

John remains on active duty and continues to inspire other injured service members to find and use the healing power of sports.