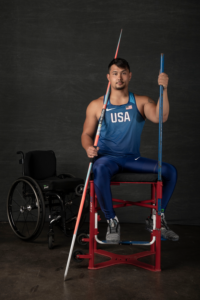 Justin Phongsavanh, now 23 years old from Ankeny, IA, was a multi sport athlete all throughout high school participating in football wrestling, track and field and rugby. Justin was involved in a random act of violence at a McDonald’s in 2015 that resulted in him getting shot multiple times resulting in a spinal cord injury.

Justin first heard about Challenged Athletes Foundation in 2016 from a local adaptive club in Iowa. He received his first equipment grant in 2017 for a throwing chair. In 2018, he received a grant for equipment to buy a javelin, which later that year allowed him to earn his place on the national team. He has obtained 3 gold medals in shot put, discus and javelin.

Justin has had multiple engagements with CAF helping in instructional videos for adaptive high school athletes. Additionally, he was head coach of seated throwers for the CAF high school adaptive sports clinic in 2019. Justin later obtained a gold medal at the Parapan American Games in Peru in 2019 and 4th place at the World Championships in Dubai.

He is currently living in Chula Vista, CA at one of the main Paralympic training facilities in the nation, getting ready for the 2021 Paralympic Games in  Tokyo, Japan. Justin credits a lot of his success to his friends and family, who were crucial elements in supporting him in his journey towards getting back into sport.