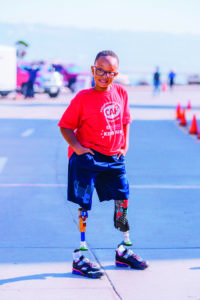 Logan is a very resilient and loving child who was born with Congenital Bilateral Tibial Hemimelia to the lower extremities, which is short for missing of the tibia bone on both legs preventing him from the gift of walking on his own. At the tender age of 22 months, he had his first surgery which was a double amputation. In June 2012, 6 months after his first surgery, he took his first steps using his new prosthetic legs with the assistance of a walker. Shortly after, he was walking without the use of a walker. So far, he has had a total of 7 surgeries on the left leg. He doesn’t allow his physical limitation to limit what he can do and accomplish. His parents strongly encourage him to live as normal as a life possible.

Logan’s first adaptive sport was swimming. He loves the water. Soon, he began noticing sports other kids around him were playing and felt that he was different from them because he couldn’t run as fast or even ride a bike to due to his physical limitation. The initial goal was to introduce him to other amputees like himself which happened at Camp No Limit in Maryland. It’s also where he fell in love with hand cycling, and where his parents learned about the Challenged Athletes Foundation.

In 2018, he won a handcycle from CAF and his journey for sports began there. He was introduced to the Rising New York Road Runners wheelchair racing program at the suggestion and recommendation of CAF’s Doug Olsen whom he met at grant night. He loves wheelchair racing and the challenges to go fast in speed while competing against others. Logan has participated in various cycling and running event, even a half marathon. His coach, Rudy Garcia-Tolson, has taught him that he can do almost anything despite his limitations. Logan loves swimming, surfing and is now on a wheelchair basketball team.