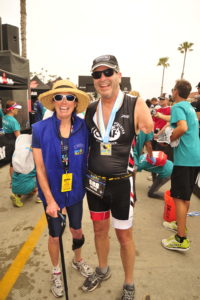 During his 17 years at CNN, Miles covered the shuttle program in great detail and negotiated a deal with NASA to be the first journalist at the International Space Station. However, these plans were canceled when the Columbia Space Shuttle disaster happened in 2003. In 2014, Miles’s life changed forever when a TV camera case fell on his arm while he was working on a story in the Philippines. What he thought was a bruised arm turned out to be acute compartment syndrome which resulted in amputation. The setback would change the trajectory of his journalism career but, he was determined to stay active and “not let his injury control him”. Shortly after the accident, CAF reached out to him and connected him with a community and adaptive equipment he never knew existed. After accepting a challenge from his Navy Lieutenant son, Miles raced IRONMAN 70.3 Oceanside as part of Team CAF/Operation Rebound.

Here is Miles’s own words about his journey:

“Since my accident, I’ve worked hard to stay in the game athletically. It has had its challenges. On one of my first one-armed runs, I stumbled on an uneven sidewalk and tried to break my fall with my missing arm. Instead, I landed flat on my face, breaking my nose. I often think about what Winston Churchill said: “If you’re going through hell, keep going”. And that is what I have been doing. I’ve run two marathons, one sprint triathlon and have ridden my bike 300 miles across Michigan over one summer weekend four times now. When my Navy Lieutenant son challenged me to join him in competing at Oceanside 70.3, I knew I had found the main event that I’d been looking for since my amputation. I know first-hand what great work CAF does and I want to do whatever I can to help their important mission. So, I told my son “game on” and got busy swimming, biking, running, and fundraising.”