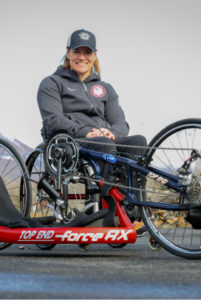 Muffy Davis began skiing at age three. She dedicated much of her time to training for the Olympic Games and as a teen was a top-ranked junior ski racer. At the age of 15, her dreams of competing alongside the world’s best skiers came to a halt when she lost control on a ski run at Bald Mountain, leaving her paralyzed from the chest down.

As she continued to diversify her portfolio, Muffy picked up competitive cycling and later went on to win a record-setting three gold medals in handcycling at the 2012 Paralympic Games in London. Muffy also serves as an Idaho state legislator and is the founder of the Women’s Athletic Foundation.

Fast forward to 2020 and you’ll find that Muffy is not only surviving as a challenged athlete, she’s thriving. With seven Paralympic medals under her belt, including three record-setting gold medals in hand cycling, Muffy is an accomplished public speaker, community leader, and an athlete who continues to push herself to new heights in pursuit of her lifelong passions.