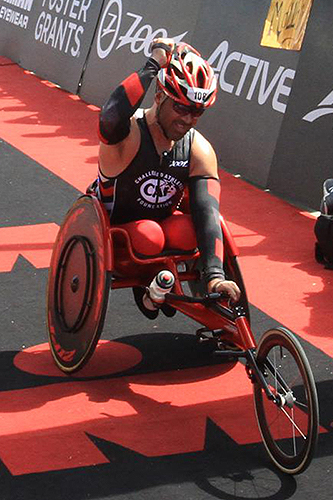 Rob Balucas is an ‘every-man joe’ who was thrust into extraordinary circumstances in 2015 when a cycling accident rendered him paraplegic. At the time he was training for his first half IRONMAN triathlon, which was supposed to take place the very next weekend. He vowed to return to triathlon within a year and raced in 3 sprint-distance triathlons the next year after his injury. He used the Strava app to track his rehab and through CAF had the opportunity to advise Strava’s engineers to include handcycling as an activity. Rob has helped shape the wheelchair athlete community at CAF.

Outside of paratriathlon, Rob resides in Southern California with his partner, Erika, and their dog Chloe. He is a small business owner at babaLucas Creative, serving the branding, marketing, and website needs of small businesses and non-profits.