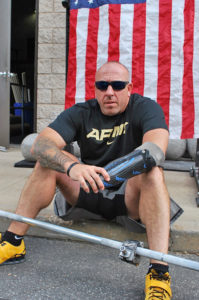 A native of New York State, Sam joined the New York National Guard shortly after the September 11th attacks. Trained as a sniper and motivated to serve, Sam quickly rose to the rank of sergeant as a member of the 1st Battalion, 69th Infantry Regiment.

In October 2004, Sam deployed with his guard unit to Iraq for a year- long combat tour. On July4, 2005, Sam was wounded in an IED blast while on patrol just outside of the Green Zone in Baghdad. Near death, Sam’s life was saved by the quick reactions of his platoon medic who stabilized his wounds and evacuated him for further care.

Within days of his injury, Sam arrived at Walter Reed Army Medical Center in Washington, D.C. where he underwent more than 40 surgeries. The severe blast wounds Sam sustained left him with limited left arm mobility and no use of his left hand, which was eventually amputated in December of 2008.

“After becoming injured I felt lost. Being a part of Operation Rebound makes me feel a part of a team again.”-Sam Cila

In May of 2007 Sam was introduced to the Challenged Athletes Foundation. He has completed numerous sprint, Olympic distance, and Ironman 70.3 triathlons, finished 4th in the 2009 ITU World Triathlon Championships and completed the 2010 Ford Ironman World Championships in Kona, HI.