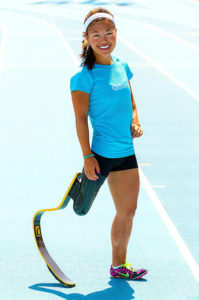 Scout is a 2-time World Championship bronze medalist in the 100 meters and long jump, 2016 Paralympian, and a CAF ambassador. Born in Nanjing China, Scout suffered the loss of her right leg due to a chemical fire and spent her early childhood in a government orphanage. She was adopted at the age of 7 by an American family and brought to the United States.

Being assimilated to American culture, she participated in all types of sports including basketball, tennis, softball, and golf before exploring her potential in track and field. She was introduced to CAF when she was 13 years old and received a grant for a running prosthetic. This would start her career as an elite sprinter, triathlete, Paralympian, and a UCLA graduate.