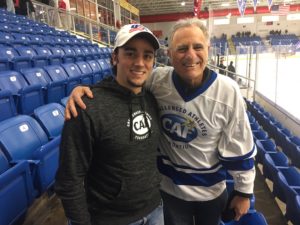 At the age of 5, Tim Kane knew he wanted to get on the ice. What started as a passion with a stick and a puck became a lifelong journey for Tim Kane as a hockey player. At age 12, his vision began to deteriorate and by the time he was 15, he was blind. He was able to finish out his high school hockey career even though his vision began to diminish, but eventually found the blind hockey community in February of 2018 during the Winter Olympics. He was awarded a 2020 CAF grant to help him do what he loves… play hockey.

Tim has never allowed his visual impairments to stop him from doing what he loves and he eventually became captain of the US National Blind Hockey Team. As Tim moves forward with his hockey career, his goals include wanting to participate in the Paralympics once a blind hockey program is set in stone, and hopefully come home with a medal.