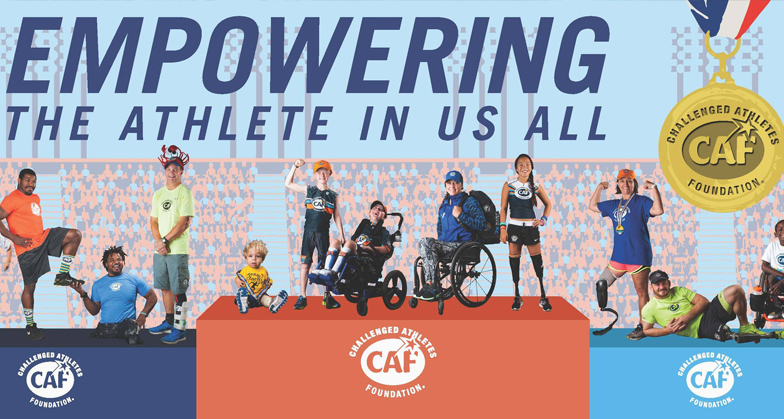 San Diego, California — September 23, 2016 – The Challenged Athletes Foundation® (CAF) celebrates the athletic performance and the power of the human spirit that was showcased during the Rio 2016 Paralympic Games. Thousands of individuals with physical challenges gathered in Brazil to compete on the world’s greatest athletic stage. CAF is honored to have supported 44%, or approximately 124 members of Team USA.

The Challenged Athletes Foundation is a non-profit that supports physically challenged individuals with financial grants for adaptive sport equipment like a running prosthetic or sport wheelchairs, as well as training and competition expenses, and mentoring.

It is the mission of CAF to provide opportunities and support to individuals with physical challenges, so they can pursue active lifestyles through physical fitness and competitive athletics. CAF believes that involvement in sport at any level increases self-esteem, encourages independence and enhances quality of life.

At the young age of 8-years-old, an aspiring Paralympian, Rudy Garcia-Tolsen, was introduced to CAF and participated in the San Diego Triathlon Challenge. After receiving numerous grants from CAF, and through his passion and determination, he reached his goal of being a Paralympian. 20 years later, Rudy just returned from his fourth Paralympic Games where he continued to prove that he has no limits and won a Silver Medal in Swimming.

In addition to helping current elite-level athletes, CAF has a strong focus on youth development to help build the next generation of Paralympic athletes. 38% of National Junior Disability Championship participants have received funding from CAF. Plus, 24% of 2016 CAF grant recipients were distributed to youth adaptive athletes.

Other notable performances by Team CAF athletes include:

“We couldn’t be more proud of the achievements of all the Team CAF athletes who competed at the Rio 2016 Paralympic Games,” said CAF Co-Founder Bob Babbitt. “Witnessing the action in person was an incredible experience for me. We look forward to continuing our support of challenged athletes around the world who prove every single day that there are no limits.”