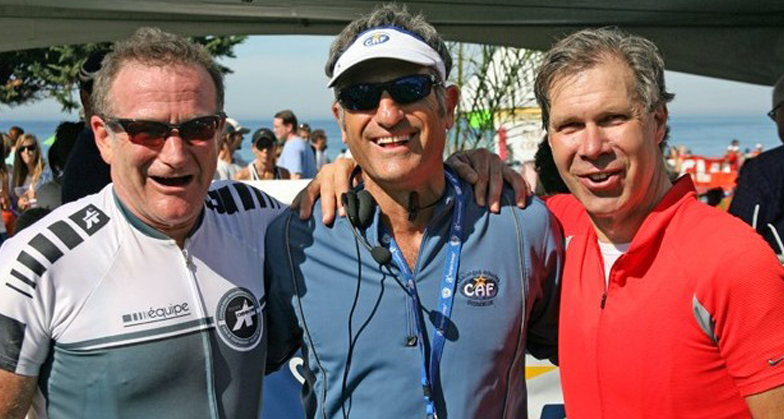 When I think of Robin Williams and his amazing support of the Challenged Athletes Foundation (CAF), there is no question in my mind that Robin had a huge impact on not only CAF, but on the sport of triathlon. When he participated in the Malibu Triathlon on a relay team back in 1997 or so, he was the first ‘A’ list celebrity to embrace our sport and to participate on a relay team.

When he came to San Diego to participate in the San Diego Triathlon Challenge, he was teamed up with double above knee amputee Rudy Garcia–Tolson, who did the 1.2 mile swim, and with two time Ironman World Champion Scott Tinley who ran the 13.1 mile half marathon. Robin, a very serious cyclist, did the 56 mile very hilly bike ride. They were Team Braveheart because Rudy had a business card that he created when he was seven years old that said on it ‘A Brave Heart is a powerful weapon.’

Rudy and Robin teamed up eleven times at the San Diego Triathlon Challenge with Scott Tinley on Team Braveheart;. Robin told me that Rudy could care less about his stature as a celebrity. “All Rudy cares about,” joked Williams, “is that I’m his video game pimp.”

One year Rudy was honored with the Casey Martin Award, which is presented each year to a person who is inspirational to the disabled. Casey Martin came on stage at the Nike headquarters in Beaverton, Oregon and told the audience, “I usually like to give out this award since it’s named after me,” he said, “but someone performed last night in New York and flew all night because he wanted to present this award to Rudy.”

At that point Robin Williams came bounding out from backstage and said, “they call Rudy a challenged athlete because he’s missing his legs. Not true. Rudy is an amazing athlete. To me a challenged athlete is a 300 pound person trying to squeeze into a pair of bike shorts!”

That was Robin. He embraced CAF and helped the world to understand that our athletes are unique and that they can accomplish anything.

One other fun Robin story that I will always cherish. When you are Robin Williams you understand that the media will come out to La Jolla Cove on the morning of the San Diego Triathlon Challenge to interview you. He also knew that when the media came to see him, they would then be exposed to our CAF athletes. But that didn’t mean the guy couldn’t have a little fun.

Putting a live microphone in front of Robin Williams is like putting a piece of raw meat in front of a lion. You sort of know what’s going to happen.

One year a reporter asked Robin what he was going to feel like at the end of the 56 mile bike ride. He asked the reporter if the segment would be live, which meant that his sound bite could not be edited, that the reporter was actually walking a tightrope without a net.

“Is this live?” Robin asked. When she nodded that it was, Robin lit up. “What will I feel like? I’ll feel like there is a river of sweat like Niagara Falls running down the crack of my ass. Oh…is this live?”