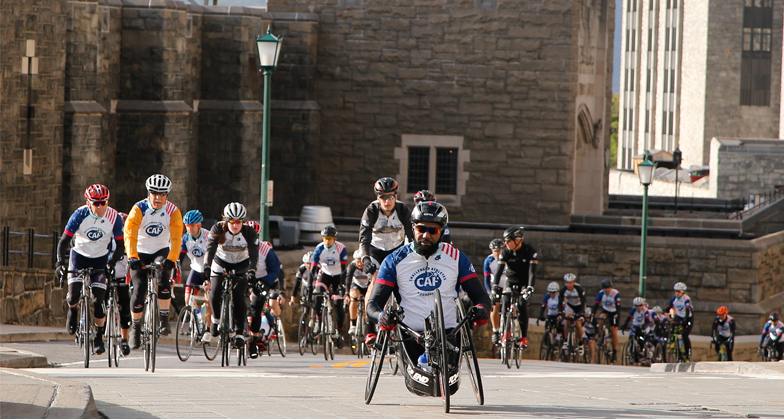 SAN DIEGO – Sept. 25, 2015 – Permanently injured military veterans will be joined by able-bodied cycling enthusiasts on the “CAF Cycling Challenge – Back to Back New York” to raise awareness and money for the Operation Rebound program, which helps military personnel, veterans and first responders with physical challenges use sports and physical fitness to re-integrate into society and lead active and fulfilling lives.

“Through activities that are physical in nature and promote camaraderie, our Operation Rebound athletes are empowered to recognize their injuries as challenges to overcome rather than life-limiting disabilities,” said Nico Marcolongo, senior manager of the Challenged Athletes Foundation Operation Rebound program.

The inaugural CAF Cycling Challenge – Back to Back New York ride will launch with a ceremonious start on Saturday, Oct. 3 from the Intrepid Sea, Air & Space Museum in New York City. The cyclists will embark on the two-day tour with route options providing 75 – 90 miles each day through the countryside from Manhattan to United States Military Academy at West Point (USMA) and back to New York City. Participants include able-bodied fundraisers from around the U.S., TODAY Show media personality Natalie Morales, New Jersey State Senator Ray Lesniak, Union County Freeholder Sergio Granados, athletes with physical challenges, and the U.S. Military Academy at West Point Cycling and Triathlon teams, as well as U.S. Military Academy at West Point cadets. Proceeds from the ride will benefit the Operation Rebound program.

Featured Operation Rebound athletes participating in the CAF Cycling Challenge – Back to Back New York include:

• Steve Baskis – Baskis lost his vision while serving with the U.S. Army in Iraq in 2008. Since then, he’s committed to proving his ability through endurance sports such as running and cycling events, even competing in a half Ironman and reaching the summit of the third highest volcano in Mexico, Ixtaccíhuatl.

• Patty Collins – After returning from an Iraq deployment in 2006, Collins was struck by a car while bicycling to work. After 10 months she made the decision to amputate her leg below the knee in the hopes of regaining her active lifestyle and continuing to serve as an active duty military officer in the U.S Army. Since her amputation, she has completed several triathlons and has won both gold and silver medals at the World Paratriathlon Championships.

• Eric McElvenny – After graduating from the U.S. Naval Academy where he was a member of the Rugby team, McElvenny deployed three times to the Middle East. On this third deployment to Afghanistan in 2011, he stepped on an IED and lost his right leg below the knee. With the support of the Operation Rebound program, he raced in his first two triathlons just six months after taking his first post-injury steps, and continues to be active in sports and paratriathlons.

• Dean Wagner – In 2004, while conducting combat operations in Iraq, U.S. Army Ranger Wagner lost his right arm below the elbow to a grenade explosion. He became involved with Operation Rebound in 2007 after applying for a grant for a racing bike and is now a member of the U.S. Paralympic Elite Cycling Team. Wagner is also active inspiring other injured service members to pursue their athletic goals.

The inaugural Back to Back New York event is a new addition to the Challenged Athletes Foundation’s premier schedule of annual cycling challenges, which encourages individuals to use their passion for cycling to make a difference in the lives of others.

For more information on the Challenged Athletes Foundation and other signature events across the U.S., visit challengedathletes.org.

About Challenged Athletes Foundation
The Challenged Athletes Foundation® (CAF) is a world leader in helping people with physical challenges lead active, healthy lifestyles. CAF believes that participation in physical activity at any level increases self-esteem, encourages independence and enhances quality of life. Since 1994, more than $67 million has been raised and over 11,000 funding requests from people with physical challenges in all 50 states and dozens of countries have been satisfied. Additionally, CAF’s outreach efforts reach another 60,000 individuals each year. Whether it’s a $2,500 grant for a handcycle, helping underwrite a carbon fiber running foot not covered by insurance, or arranging enthusiastic encouragement from a mentor who has triumphed over a similar challenge, CAF’s mission is clear: give opportunities and support to those with the desire to live active, athletic lifestyles. To learn more, visit challengedathletes.org or call 858-866-0959.