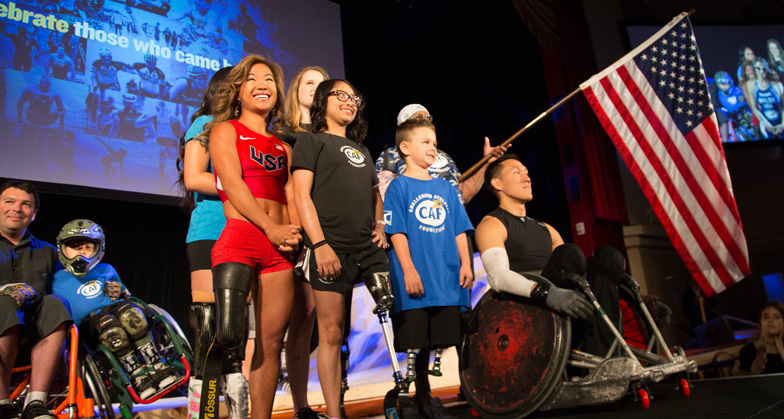 During an evening of celebrating ‘A Decade of Difference’ through empowering human spirit, achievement and dedication, over 1,000 attendees gathered at the Challenged Athletes Foundation’s® (CAF) 10th anniversary of A Celebration of Heroes, Heart and Hope Gala. The event raised a record breaking $2.85 million and still counting as the donations and support keep coming in from the New York community, to support fitness and athletic endeavors for people with physical challenges around the world.

CAF, the global leader in helping people with physical challenges live active lifestyles – holds this signature celebration each year at the Waldorf Astoria New York to raise funds for its Access for Athletes Grant Program. This program provides grants for adaptive sports equipment, travel and training expenses to challenged athletes around the world. Funds raised at the gala also supports the organization’s mentorship programs and annual free sports clinics.

More than 50 challenged athletes attended the celebration. The Today Show’s Willie Geist and Dylan Dreyer were the evening’s co-hosts, celebrating the trailblazers who’ve made a difference for a community, while guiding attendees through uplifting stories of athletic spirit, spectacular entertainment and a live auction. Auction winners will be heading to the IRONMAN® World Championship taking place in Kailua-Kona, Hawai`i on October 8th to compete against triathlon’s best of the best, and the exclusive Dave Scott Triathlon Experience at the Four Seasons Resort Haulalai in Hawaii.

The evening featured incredible moments, including an exciting live WCMX (wheelchair motocross) and skate demonstration by industry legend Christiaan “Otter” Bailey and his mentee nine-year-old Kumaka Jensen – showcasing the amazing impact this type of special relationship can have for a young challenged athlete.

The evening’s honoree, founder and chairman of the gala, and CAF Board Member, Scott Stackman remarked:

“The transformational power of physical activity and sports should be accessible to everyone. No grants to individuals with physical challenges should go unfunded. It’s thanks to our dedicated supporters who stand beside the Challenged Athletes Foundation in this premise that allow us to make this a reality,” said Stackman, Managing Director of UBS Private Wealth Management. “We gather to celebrate a decade of difference displayed by the achievements of challenged athletes all over the world, but we also know there are people who still need our support to realize their athletic goals. The $2.85 million raised and still counting as the donations and support keep coming in from the New York community, will help the Challenged Athletes Foundation increase the number of athletes and their families who can benefit from our programs and support.”

Through the Challenged Athletes Foundation’s 2016 Access for Athletes Grant Program, funded in part through the gala, a record 2,098 grants were distributed around the world in April 2016, representing a collective value of more than $3.7 million.

Watch a video from the event:

The Challenged Athletes Foundation® (CAF) is a world leader in helping people with physical challenges lead active, healthy lifestyles. CAF believes that participation in physical activity at any level increases self-esteem, encourages independence and enhances quality of life. Since 1994, more than $73 million has been raised and over 13,000 funding requests from people with physical challenges in all 50 states and dozens of countries have been satisfied. Additionally, CAF’s outreach efforts reach another 60,000 individuals each year. Whether it’s a $2,500 grant for a handcycle, helping underwrite a carbon fiber running foot not covered by insurance, or arranging enthusiastic encouragement from a mentor who has triumphed over a similar challenge, CAF’s mission is clear: give opportunities and support to those with the desire to live active, athletic lifestyles To learn more, visit challengedathletes.org or call 858- 866-0959.