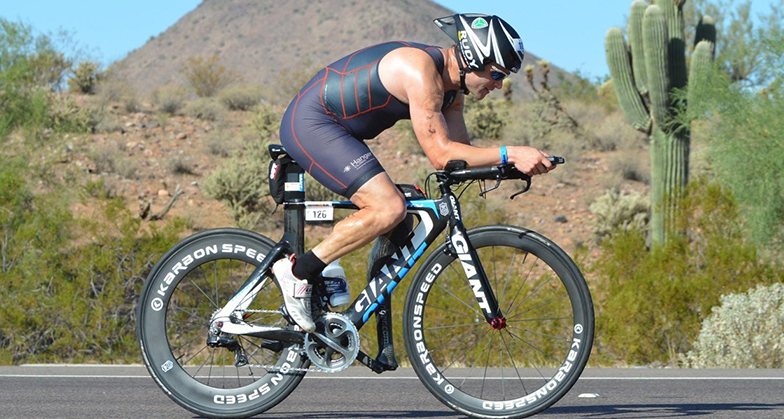 Challenged athlete Nick Roumonada’s reflects on Wildflower, AKA “The Woodstock for Triathlons.”

“As soon as my race season ended last year with another, but most memorable, IRONMAN Arizona finish, I thought to myself, what’s next? It’s always – rest, recover and then TRAIN FOR WILDFLOWER! It’s one of those races you can’t just show up to “have fun” or have a “catered training day.” Are those types of races out there? Sure, but Wildflower isn’t that race and that’s what makes it perfect for people like us, triathletes. It’s the bucket list race of all bucket list races. It’s one of those you have to start frantically training for WAY too soon in the season because you don’t want to suffer. Suffer you will, but the race, the race experience, the venue and the people will make it all worthwhile.

I started doing triathlons 5 years ago as a way  to help heal from all the loss I’ve experienced in my life. Challenge #1 – At the age of 13 I was stricken with and survived bacterial meningitis. Thanks to my folks and their quick response, I was rushed to the hospital which saved my life, but unfortunately, not all of my limbs. After 6 months in the hospital, and a dozen surgeries, I was given the choice whether or not to amputate a foot that was devastated by the disease. I took the chance and chose amputation below the knee in order to have a chance at regaining an active lifestyle; one that I had lived up to that point. I did what I could but due to financial restrictions my family couldn’t afford the special sports prosthetics I needed in order to get back into the game. It was then that I took up music. I replaced my sports with music and ran with it. I went on to play the trumpet professionally from the age of 17. Challenge #2 – Music was my passion, it was my life, it’s what paid the bills and it took me to all parts of the world. That was until the age of 30 while I was living in New York City trying to “make it.” After struggling with a lot of pain while playing, I was referred to a specialist at Columbia Medical Center where I was given the paralyzing news that I was no longer going to be able to play music. A neurological disorder, focal dystonia, was causing all the pain and I was told I would have to put down the horn and move on… Move on?? Tough pill to swallow. The only reason I did was because I was told if I didn’t, there was a chance the symptoms I was experiencing would begin to disrupt my ability to eat and speak.

Here’s where the story gets good. After my diagnosis I was able to get back into life, through sport, thanks to an incredible organization that some of you might be familiar with, The Challenged Athletes Foundation (CAF). CAF provides adaptive sporting equipment such as racing wheelchairs, training/coaching grants and running prosthetics to people like me. CAF’s gift of a running foot was the catalyst to all that was to come. I began training in Central Park, running late at night after work and school. I got my distance up and entered into my first 5k, 10k and ½ marathon races. I found success in all of these distances and was ready to take it to the next level, triathlon! CAF has had a long and wonderful relationship with everyone at Tri Cal, and Wildflower was the one race that everyone talked about. I was ready… at least I thought I was…

Wildflower take one: After a strong start, I was almost stopped by the inability to keep my leg on – yes, keep my leg on. Due to the extreme heat, uneven terrain and the fact that I sweat like a beast, keeping my running prosthetic attached was impossible and I struggled to finish the Olympic Distance. Wildflower take two: Since I had gone and done my first couple ½ IRONMAN races and was racing around the five and half hour mark, I was sure I was ready for the full distance at Wildflower… RIGHT! It was another HOT year and I was experiencing the same challenge with my prosthetic staying on… that was until I stopped sweating. NOT GOOD! Let’s just say it was that race I discovered the magic of SaltStick. At mile 12 of the run, I was heading down hill towards the finish and BOOM, my whole right quad cramped. Another competitor saw me fall straight into, and go over the guardrail, coming to my aid with salt. I managed to limp my way to a finish which left me both scared to death about my scheduled first full IRONMAN and yet confident at the same time. I thought to myself, “If I can survive the Wildflower long course, I can finish IRONMAN.” So I went and did it – in 11hrs and 13min.

That is why I will always race Wildflower. It’s tough enough that you can’t show up unprepared and by beating you down it can somehow give you the confidence to tackle any race you once thought was impossible. As you might be able to tell, I like to take challenges and turn them into opportunities. Each and every year Tri Cal and CAF gives challenged athletes like me the opportunity to take on Wildflower because they know if they set the bar high enough, great things are possible. Take the opportunity to race Wildflower and run with it… you’ll be stronger for it.”