There is something about setting out on a run that both opens the heart and settles the soul. A few strides in and the worries and noise of life all seem to fade away and a sense of peace is ushered in. I was lucky enough to have found running at a very early age.

I was seven years old and the new girl in town when the local coach came into my second grade classroom and asked if anyone would like to join the team. I didn’t know anyone and thought it would be a good way to meet friends. That was the first day of what would be 43 years of distance running including 50 half-marathons, five marathons and a personal record of 3:23 at the 2013 Boston Marathon. 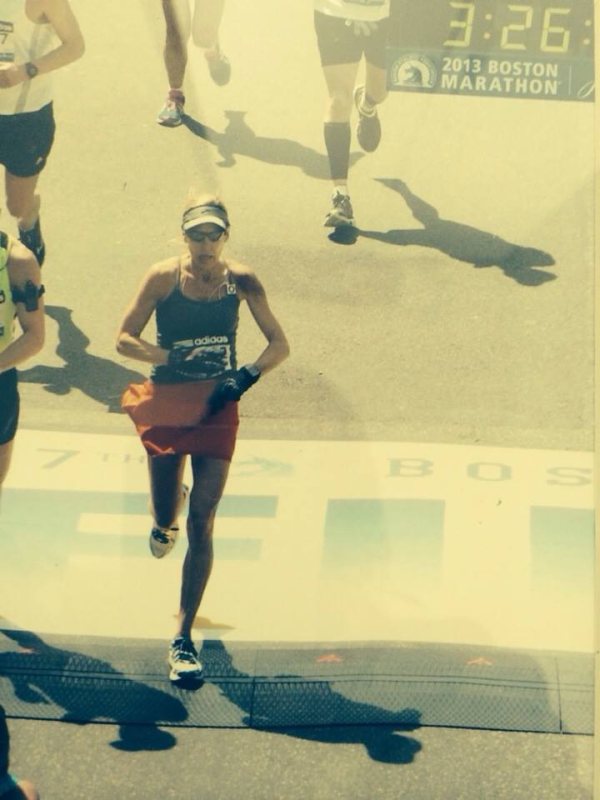 Running has always given me peace. I ran my first half-marathon after a bad break up at the age of 26. It’s been there for me through good times and bad — bad hair and acne in high school, college stress, breakups, celebrations, falling in love, marriage and raising kids. I love the freedom, the wind in my hair and the sound of my lungs pumping life into me. It has been my friend, my sidekick, my release and I felt alive.

In Oct of 2015, after running my last marathon, I noticed something was off with my body. I was tripping, falling and my gait just felt “off”. I knew my body and this feeling was different and worrisome. I spent the next five years visiting various doctors and searching for a diagnosis. They ruled out the scary stuff like cancer, brain tumors, MS and Parkinsons, they told me I was just getting older and “things change.” I knew in my heart something was very wrong and I was getting worse. 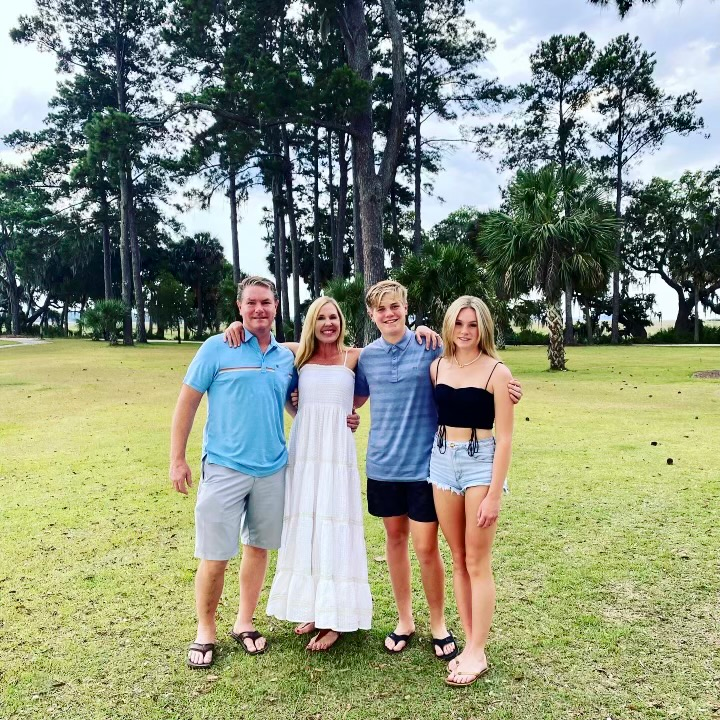 In September of 2019, I contacted the Mayo Clinic in Phoenix, Arizona and asked them to take over my case. My husband Mike and I arrived and I was sent through extensive testing. On day four, I received my devastating diagnosis: Cerebellar Ataxia, my cerebellum was shrinking. The cerebellum is responsible for balance and coordination — something we all use to walk and do daily tasks and activities. There is no current cure. I can still walk, but only with support.

The diagnosis was a hard pill to swallow. The idea of never running again shattered me. How would I cope without the release that running has always given me? I found myself grieving for several months. Eventually, I redirected my focus and made the decision that I wasn’t going to let this change who I was. I was still Michelle, a wife, mother, friend and an athlete. I began writing down an outline of my life as a runner. I found it to be so peaceful and therapeutic that when I was done, I was inspired to write a book that might help someone else struggling with life’s challenges.

Then, the pandemic hit. In April 2020, I bought a Peloton to keep my legs strong. Even though I had never tried cycling, I really enjoyed it. I rode it nearly every day – in fact I’m on my 77th consecutive week! It was a godsend. Although I missed being outside and enjoying the independence of the open road, I love to sweat and it made me feel like a part of a community again. The only thing I still longed for was feeling the wind in my hair.

In past years I had heard about the Challenged Athletes Foundation (CAF), but never did I think I’d become an athlete with a physical challenge in need of this community. I reached out to a running friend of mine, Christy Fritts, who works for CAF, and asked if there was any type of adaptive bike I could try. Christy went to work immediately and called a few days later to come to the office. Nervously, Mike and I drove down to the CAF headquarters and next thing I knew, I was standing over my first “set of wheels”.

Before I knew what was going on, CAF Programs Director Travis Ricks and rock-star CAF volunteer Mike Jennings fitted me to a recumbent trike that had belonged to another athlete, Steven Peace. They put a helmet on me and pushed me into the parking lot. Off I went, screaming with happiness and finally feeling the wind in my hair! As I approached the building, happy tears filled up my eyes and I felt at peace knowing there is a new sport ahead of me! 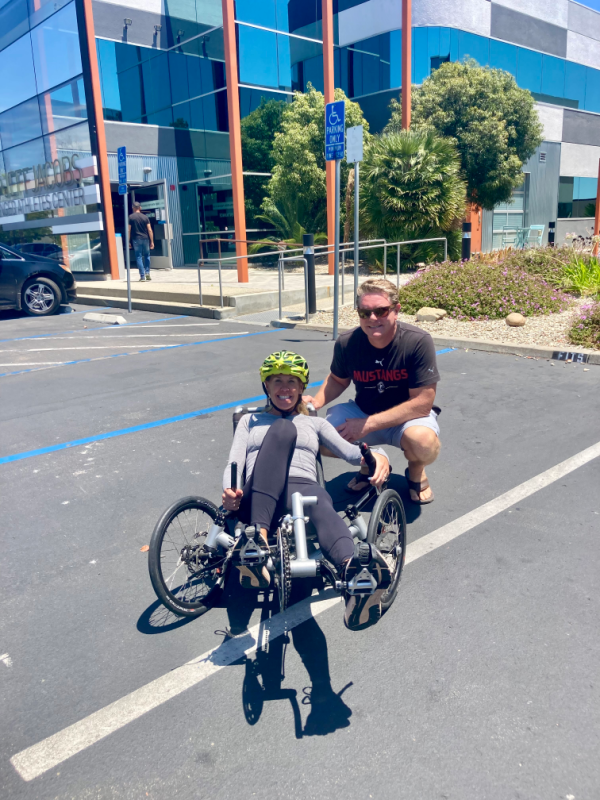 They loaded the bike in my car and told me to borrow it for as long as I needed. The next morning, I rode around my neighborhood. The day after that, friends from my old running group escorted me on a fabulous 20-mile coast ride. The following day, a soccer dad shadowed me on a 30-mile ride to my son’s soccer game. In just three short days I became a different person. I became a cyclist. I became a believer. And a huge fan and supporter of CAF’s mission – to empower people with physical challenges through physical fitness and sports. Now, I want to help and support other challenged athletes. I just have to!

Christy mentioned the CAF Million Dollar Challenge (MDC) bike ride down the California coast this October. The MDC is a 7-day, 640-mile bike ride from San Francisco to San Diego with over 160 fundraisers (20 of them physically challenged athletes) using their passion for cycling to make a difference in the lives of others. After a few days of cycling, I immediately wanted to participate! Luckily for me, there is a 3-day option from Santa Barbara to San Diego, which sounds amazing and scary at the same time. Mike will be my support and be pedaling alongside me, just like he’s done since we were married in 2001. 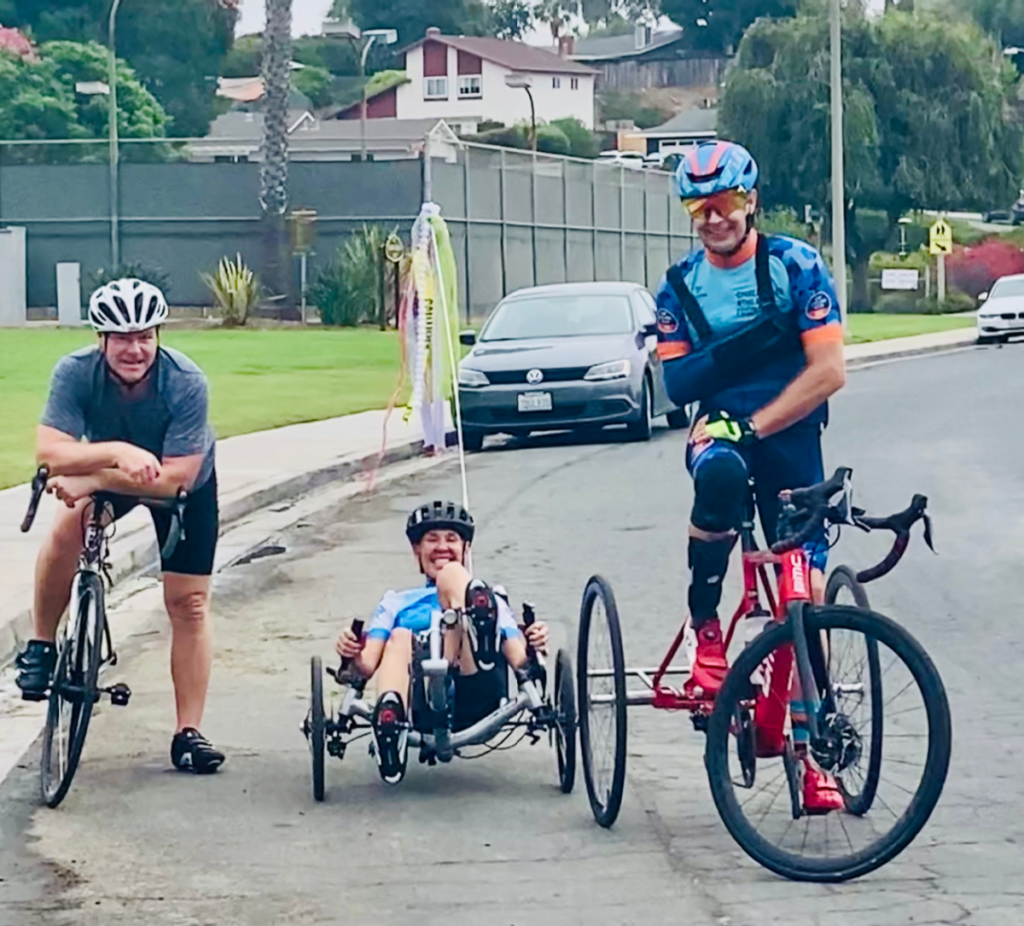 On Aug 28th, I attended my first CAF MDC group training ride and met Steven Peace, the previous owner of my recumbent bike. He took me under his wing for the next 40 miles and I had no idea of his amazing accomplishments in paracycling! Steven is a retired US Navy officer who suffered a massive stroke leaving him paralyzed on his right side. Three years later, with tenacity, determination and the help of CAF Operation Rebound, he launched into a second career in triathlon and cycling. An elite athlete, he has gone on to win World Cups, Nationals and competed in the 2012 Paralympics. “Before my injury I played it safe, but now with the support and inspiration of CAF and my newly found abilities I know I can conquer any challenge.”-Steve Peace

Not only do I feel honored to ride his old bike but to have him as a mentor has been wonderful. CAF has given me a new community I never knew existed. Every weekend I look forward to biking with this amazing group of powerful friends and supporters. Mike and I are truly blown away by CAF and can’t wait to ride down the stunning California coastline in a few short weeks! I will be riding with the wind at my back and through my hair marveling in the freedom that a few wheels and a lot of friends can bring to life.

This October, my first book will be released: When Your Worst Day of Your Life Didn’t Kill You – The Morning After.