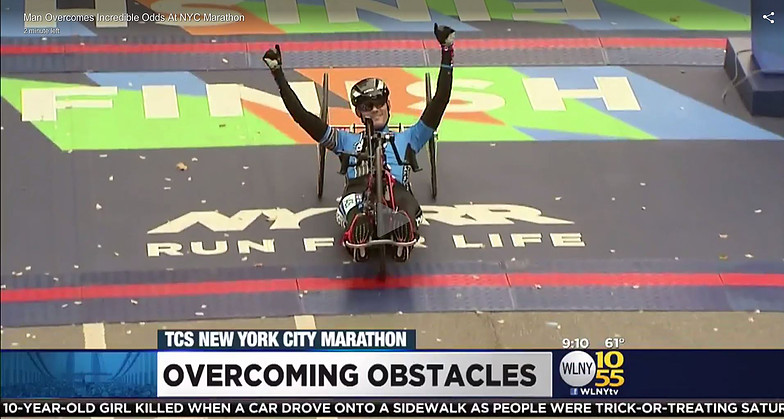 May 31st, 2014 started like any other race day morning: an extremely early wake up call, a double and triple check of my car for all my triathlon race essentials, then a drive down to the race site before sunrise. Even though I had pinned on a race bib over 175 times, I still yearned for the thrill of competition, the exhilaration of pushing myself to my limits, and challenging myself in ways I never thought possible. Racing and competition was an addiction I could not shake.

This morning was a short sprint triathlon, an event that I had won the year prior.   I liked to call myself an “experienced” triathlete; when I came out of the water 4th in my wave (my weakest of the three segments) and could still see the three folks in front of me…it was on. It was so “on” that I forgot my cycling shoes in my car! I had to race the entire bike portion of the race without my cycling shoes clipped in like some triathlon newbie that had never raced before, let alone over 175 times, including winning here the previous year! Yes, May 31st, 2014 started like any other, but little did I know the last triathlon race of my able-bodied career would be so memorable.

In sports and in life, we must live life through the windshield and not the rearview mirror. Bad things happen to all of us, but we must find a way to pick up the pieces and move on.

June 12th, 2014 was just another training day morning. A very early wake up call, getting dressed, grabbing my tri-bike and getting out the door before 5 AM in order to ride 40+ miles before work. 34 miles into the ride is when that day changed my life forever. You see, a year prior I was fortunate to be on the cover of Runner’s World Magazine, less than one month before I finished my 5thIronman race. I was getting ready for another, and in the absolute best shape of my life.   At mile 34 of a ride I had completed over one hundred times, a vehicle made an illegal U-turn—we collided and I was instantly paralyzed from the chest down. I spent the next three months in the hospital trying to figure out exactly what just happened and what was next.

Among the things that was “next” for me was finding a new way to compete and return to doing what I loved with the people that had helped me overcome so much. As I was lying in the hospital I found an organization whose mission statement was “to provide opportunities and support to people with physical challenges so they can pursue active lifestyles through physical fitness and competitive athletics.” I was intrigued. I did a little more research and happened to meet an athlete that had a very successful career as a hand cyclist; as I heard him talk and explain how he got into the sport and how it changed his life, it was as if he was foreshadowing what was to come for me. I was hooked without even trying a hand cycle. I knew this was for me; I knew this was for me even though I had never bothered pushing my upper body strength. In the rehab facility I had to learn and retrain my body to do everything—I was “building” strength by using the purple and pink weights…yes, the one and two pounders.

In case you haven’t guessed, I was referring to the Challenged Athletes Foundation. I applied immediately for a grant that supports individuals like myself. This was one of the BEST decisions I could have made. I received my hand cycle in February, 2015 and had my sights set on racing at a few local events to get prepared, but my sights were truly set on returning to my very first race where it all started over 175 races ago at the 2016 New York City Marathon! Arriving at the start line last fall was as if nothing had changed. The day before routine was almost the same, the pre-race routine was almost the same, then finally, there I was with over 45,000 of my closest friends, all of us striving for our own personal goals: to simply overcome an obstacle. We encouraged one another along the way, waiting for the magic of the finish line…which wasn’t the same at all—it was better! I finished 10th overall, and proceeded to race both the Philadelphia and LA Marathon over the winter where I placed 3rd respectively in each!

The past two years have certainly been a whirlwind of emotions, a lot of new firsts that I could have never imagined in a million years. The multisport world brings out the best in everybody. I can’t thank my family, friends and fellow athletes for the continuous support since the accident. I won’t wait for something magical to happen if I can make something happen!