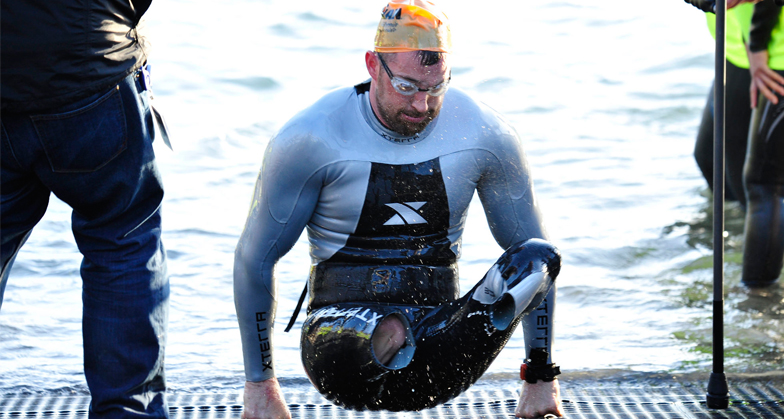 Challenged Athletes Foundation® (CAF) is proud to announce that it has entered a new multi-year partnership with XTERRA WETSUITS as the “Official Wetsuit Sponsor” of CAF. Through this relationship, XTERRA will contribute to CAF’s mission by helping people with physical challenges pursue an active lifestyle through physical fitness and athletics. CAF believes that involvement in sports at any level increases self-esteem, encourages independence and enhances quality of life.
  
 CAF’s mission is clear: give those with the desire to live active, competitive lifestyles every opportunity to compete in the sports they love.

As a long term partner, XTERRA WETSUITS, will continue their support of CAF’s Aspen Medical Products San Diego Triathlon Challenge, otherwise known as the #bestdayintri. Additionally, they have provided top triathlon wetsuits to CAF’s Elite Paratriathlon Team, which has been training and competing over the past four years in hopes of making Team USA when the sport debuts this year at the 2016 Rio Paralympics Games. Three of the team members have earned their provisional spots for the Paralympics, which will be secured as they compete March 12-13 at the Continental Championship in Sarasota, Florida.

Keith Simmons, Founder and co-owner of XTERRA WETSUITS remarked on the partnership with CAF, “We have been proud supporters of the San Diego Triathlon Challenge for 15 years and the Elite Team over the past four years. We are delighted to elevate this relationship to support CAF’s other programs like Operation Rebound. We are strong believers in helping our injured military rebound in life through sports and especially surfing and we are honored to provide wetsuits to these admirable people who serve our country.”

XTERRA WETSUITS will expand its support to CAF’s Operation Rebound Program, which is the premier sports and fitness program for American military personnel, veterans and first responders with physical challenges. CAF, together with the Del Mar Lifeguards and Balboa Navy Medical Center San Diego, host a weekly surf clinic for injured troops in Del Mar.

The Challenged Athletes Foundation® (CAF) is a world leader in helping people with physical challenges lead active, healthy lifestyles. CAF believes that participation in physical activity at any level increases self-esteem, encourages independence and enhances quality of life. Since 1994, more than $70 million has been raised and over 11,000 funding requests from people with physical challenges in all 50 states and dozens of countries have been satisfied. Additionally, CAF’s outreach efforts reach another 60,000 individuals each year. Whether it’s a $2,500 grant for a hand cycle, helping underwrite a carbon fiber running foot not covered by insurance, or arranging enthusiastic encouragement from a mentor who has triumphed over a similar challenge, CAF’s mission is clear: give opportunities and support to those with the desire to live active, athletic lifestyles To learn more, visit challengedathletes.org or call 858-866-0959.

 Established in 2013, the CAF Elite Paratriathlon Team was formed to provide some of the top U.S. paratriathletes the support they need to compete at the highest level with the goal of racing at Paratriathlon’s debut in the 2016 Paralympics in Rio de Janeiro, Brazil. Members enjoy funding and product donations from sponsors including J&L Pie Company, Nike, Procellera Elite, ISM Saddles, XTERRA Wetsuits, nuun, and Rudy Project. These partners assist CAF in providing the team with apparel and shoes, nutrition, bike seats, wound recovery, equipment, training stipends and race expenses that give the team the best chance to reach their highest potential…

The CAF Elite Paratriathlon Team has selected seven CAF-supported physically challenged athletes for this team – including both male and female athletes from a variety of disability classes – based on past performance in National and International Paratriathlon races, growth potential within the sport and their ability to represent CAF’s mission and our sponsors.

XTERRA WETSUITS, the dominating global brand in triathlon wetsuits, was founded in 2001 and
is headquartered in San Diego, California, the birthplace of triathlon. Eco-friendly XTERRA WETSUITS are designed by triathletes and open water swimmers with four key components in mind: comfort, speed, buoyancy, and value. Under the leadership of endurance athletes Keith Simmons and Glynn Turquand, XTERRA has become the number one triathlon wetsuit company in the United States, and has expanded with stand-up paddle boards and surf under their XTERRA BOARDS and XTERRA SURF divisions. XTERRA is focused on the direct-to-consumer model, thereby providing the highest quality products at the lowest price, sharing savings with our customers and extending significant resources towards constant innovation. For more information, please
visit www.xterrawetsuits.com ,www.xterraboards.com and www.xterrasurf.com