I’ve lived the majority of my life with two legs, where I didn’t have to think about the struggles that come along with being an amputee. My back to school supplies consisted of backpacks and notebooks, whereas now I have to stock up on new liners and sleeves for my prosthetic leg. Being an amputee changes many aspects of your life, and school has been one that has changed for me.

In high school, I was fortunate that all my friends had known me before my amputation. I was afraid that when I met new people in college, my identity would be based around being an amputee. I didn’t want people to know me as just “the girl with one leg.” When I went to orientation, I found that I was worried for nothing. Of course, some people were intrigued by my prosthetic, but it was no different than it would be walking down the street. I found that people were accepting and willing to get to know me for who I really am. Sure, I had to have a semi-awkward conversation with my roommates to explain why I needed the bottom bunk bed, but all it took was a moment of awkwardness to be able to create genuine connections with people. 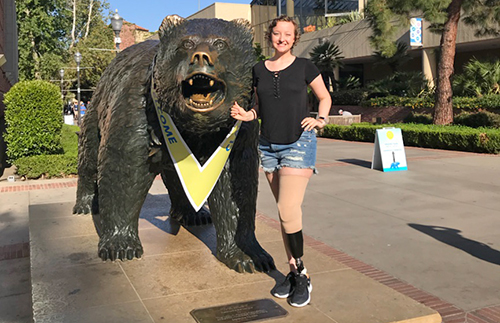 One thing I wasn’t prepared for going to college, was how much walking I would have to be doing. My leg started hurting only a few hours into the first morning of my orientation, and I still had a campus tour on my agenda. I saw my peers maneuver the campus’ hills and stairs with ease, while I was struggling with walking from one presentation to the next. For a second I doubted if I should even be going to such a big college like the University of California, Los Angeles, but then I remembered the path other amputees had paved before me. If it’s possible for an amputee to finish an IRONMAN triathlon, it would be possible for me to get around a college campus. Despite this epiphany, I knew I couldn’t do it alone.

At orientation, I was hesitant at first to ask for help, thinking maybe I could do it on my own, but it wasn’t until I talked to someone that I felt confident about getting around campus. I learned about all kinds of services they had to assist people like me, and how I could use them only when I needed them.

In reality, I know there will be days when my prosthetic isn’t fitting right, and I can’t walk miles across campus. It gives me peace of mind to know a van can come to pick me up when I need it.

Sometimes, help will be sitting there waiting for you to take it, while other times it will be hidden and you will have to look for it—but it will always there.

The biggest piece of advice I could give to anyone with a challenge is to learn to accept and seek help. I know that if I don’t want my physical challenges to get in the way of my education, I will have to have assistance. It’s not like high school where people are there asking what they could do to help. Instead, when I need help, I have to make an effort to go to the Center for Accessibility. 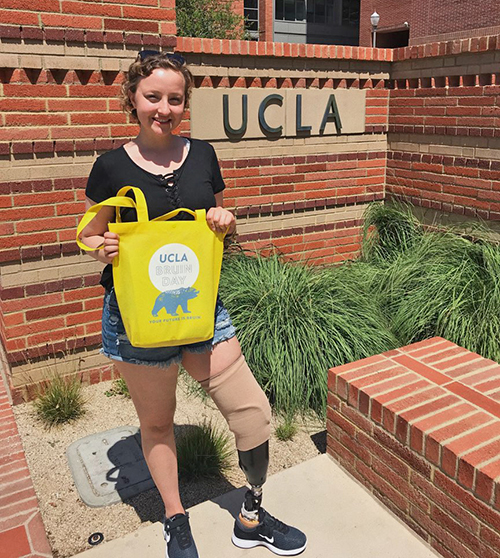 As I prepare to move into college, I reflect on the impact being an amputee has made on my education, and my life. I have been able to go places and do things that I would never have imagined before I lost my leg. I have gained a greater understanding of the world around me, and the ability to connect on a deeper level with my peers. In the grand scheme of things, I know that the challenges I face in school will be clouded over by the amazing memories and friendships I will make. I know that it won’t always be easy, but it will be possible.