The stage was set on a stunning continental landing site in Antarctica when MLB All-Star pitcher Joe Musgrove fired an 86 mph four-seamed fastball to teammate Sean Manaea. In an effort to raise awareness for CAF, he sailed to Antarctica with several CAF athletes to push limits and help change perceptions in the most extreme environment on Earth. He also set a world-record for the fastest pitch ever thrown on the continent of Antarctica. 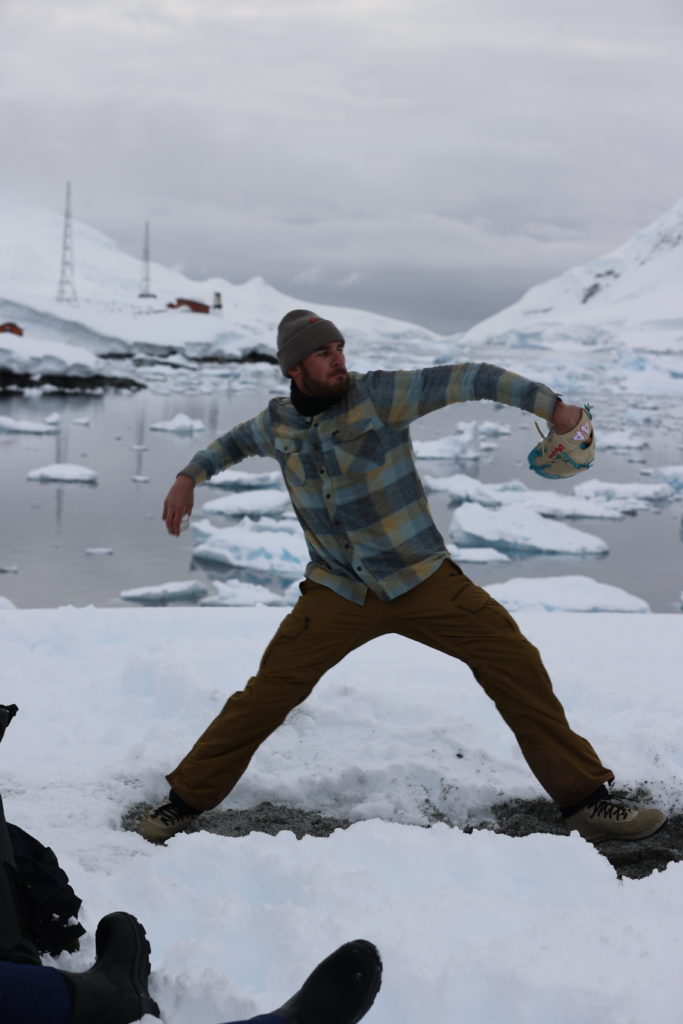 Neill Drake, a close friend to Musgrove, is a polar expedition guide in Antarctica during the southern summer. One evening over dinner, he invited Joe to join him on a group trip he plans each year. The trip dates happened to coincide with Joe’s 30th birthday and it started sounding like an epic way to celebrate. As the two began planning their adventure together, they considered how they could utilize Musgrove’s growing platform to raise awareness for the Challenged Athletes Foundation. Drake and Musgrove put together a fundraiser and raised enough funds to bring along a few athletes to embark on the journey with them. Musgrove couldn’t wait to bring the group together and show them a part of the world that they might have thought would never be accessible to them.

“I was inspired by Joe’s commitment to his community. Joe set the record and supported some incredible athletes in their quest for reaching new epic adventures, regardless of their limitations.”  – Neill Drake, friend of Musgrove and Polar Expedition Guide

Landis: Just Watch Me released around the same time of this trip, features CAF athlete Landis Sims, a 16-year-old varsity baseball player who was born without hands and feet. This documentary film follows Landis for eight years, and features Musgrove who has become a role model and mentor for Landis. Musgrove describes the friendship as a two-way mentorship. 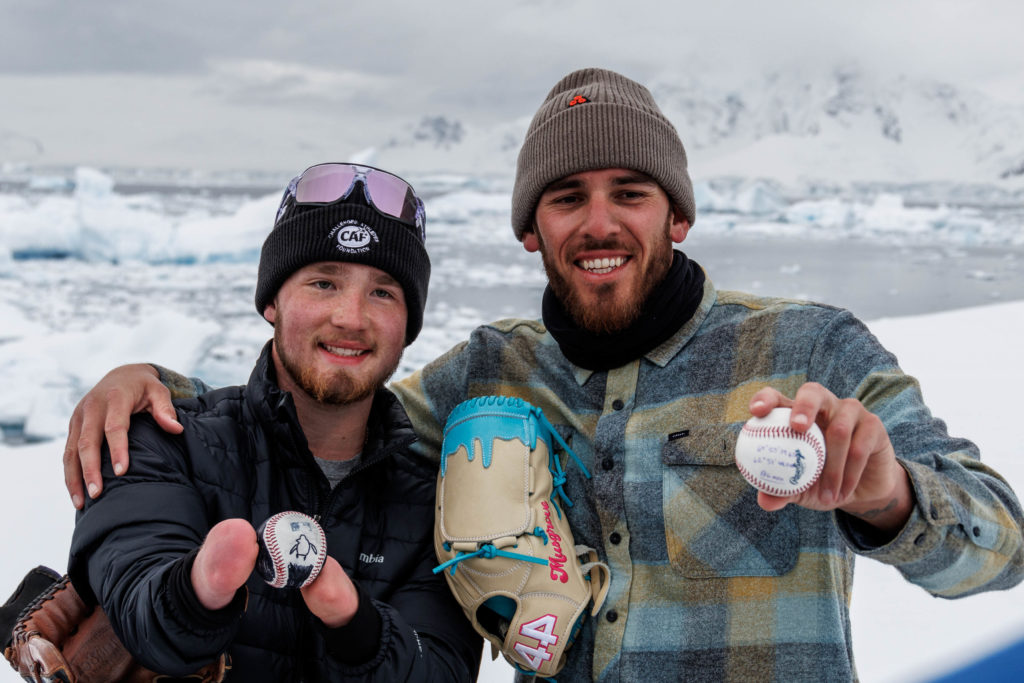 “Joe has just always shown up for me.” – Landis Sims

“I feel like I’m the one who is always being inspired by Landis and these other athletes who overcome their challenges every day to achieve their goals. Antarctica is one of the world’s most remote and extreme destinations. I can’t think of a better place to bring Landis to further exemplify the “No Limits” theme of his documentary.” – Joe Musgrove

Also joining Musgrove and Landis were CAF athletes Roderick Sewell, a double above knee amputee who became the first to finish the Ironman World Championship and Justin Phongsavanh, who was paralyzed after he was shot in an unprovoked assault. Justin recently won a bronze medal in the Tokyo Paralympic Games for the javelin throw and currently holds a world record.

Getting to Antarctica can be an adventure. Travelers must sail across the infamous Drake Passage, a turbulent 600-mile body of water connecting South America and The White Continent.  The powerful convergence of three oceans can create massive waves making the crossing to the continent already feel like an accomplishment. Once there, groups of ten were offered daily zodiac landings at fascinating lookouts, penguin rookeries and research stations. Musgrove and his group bonded over the indescribable beauty and their shared quest for the epic adventure. 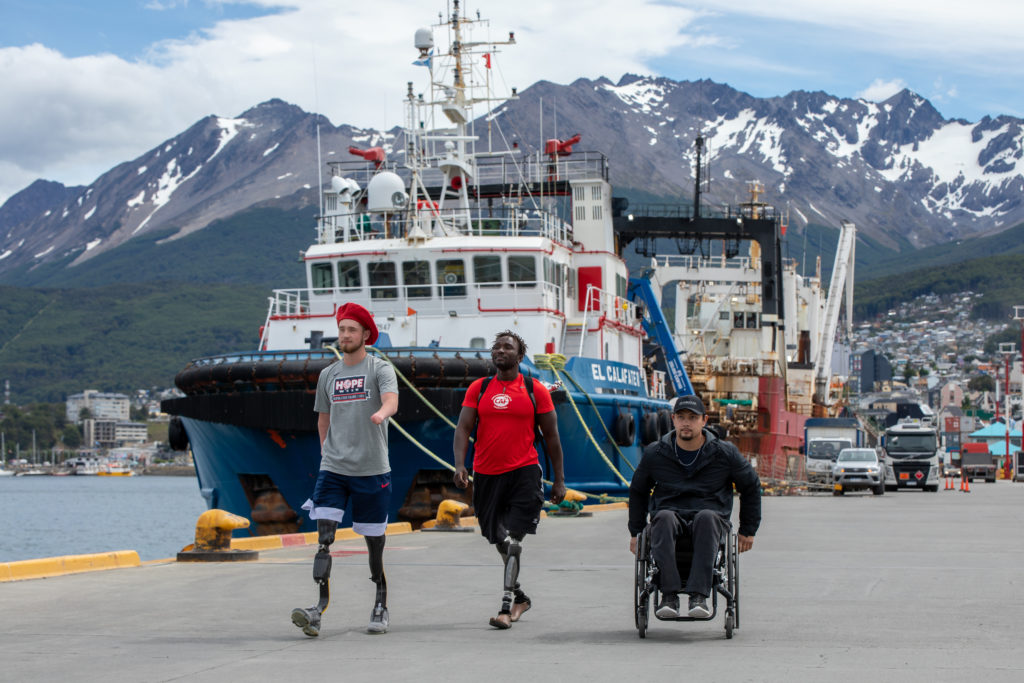 With specialized adaptive equipment, the CAF athletes were able to move across the extreme terrain and explore Antarctica. Justin Phongsavanh used a GRIT Freedom Chair to enjoy his first continental landing and interact with the penguins. The custom off-road chair is a mix between a manual wheelchair and a mountain bike. It allowed him to explore on the glacial snow and navigate the rocky shoreline transitions. 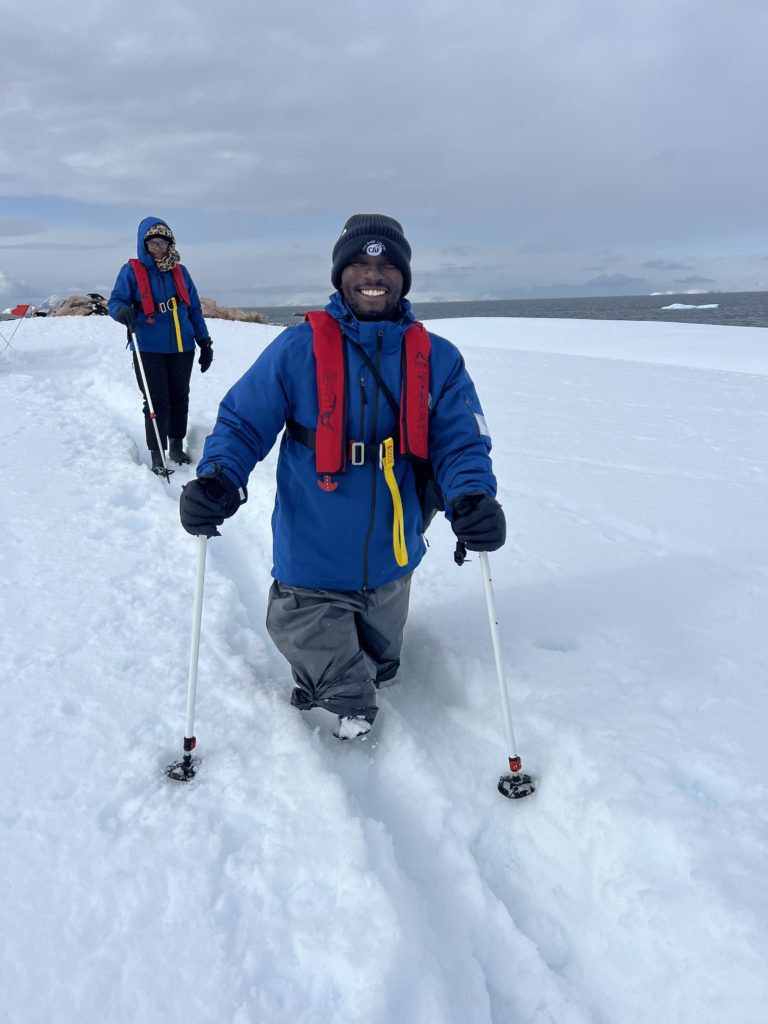 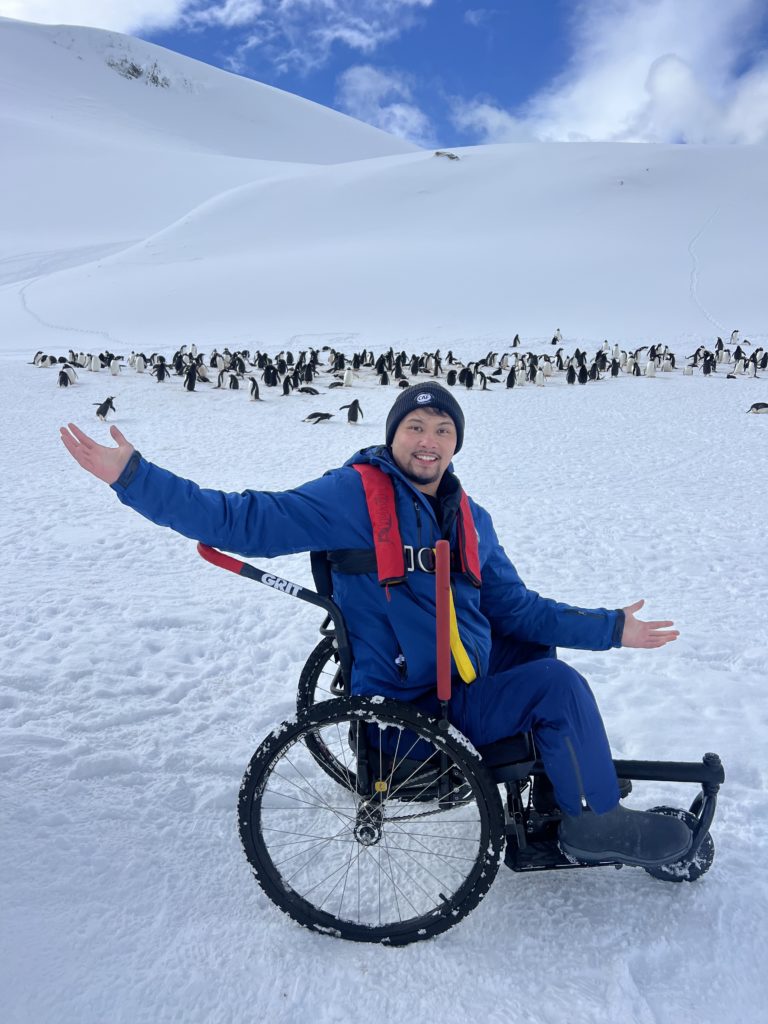 Landis Sims used his custom Össur running legs to navigate his way across the snow packed landing. He and Musgrove hiked up hills, laughing while both struggled to stay atop the deep powder. For kayaking, Landis used a custom-made attachment on his forearm (an extension of his bat attachment). It was designed by his stepfather and allowed him to paddle through polar water and icebergs. “No hands, no feet, no limits, so part of this trip is testing that,” said Landis. 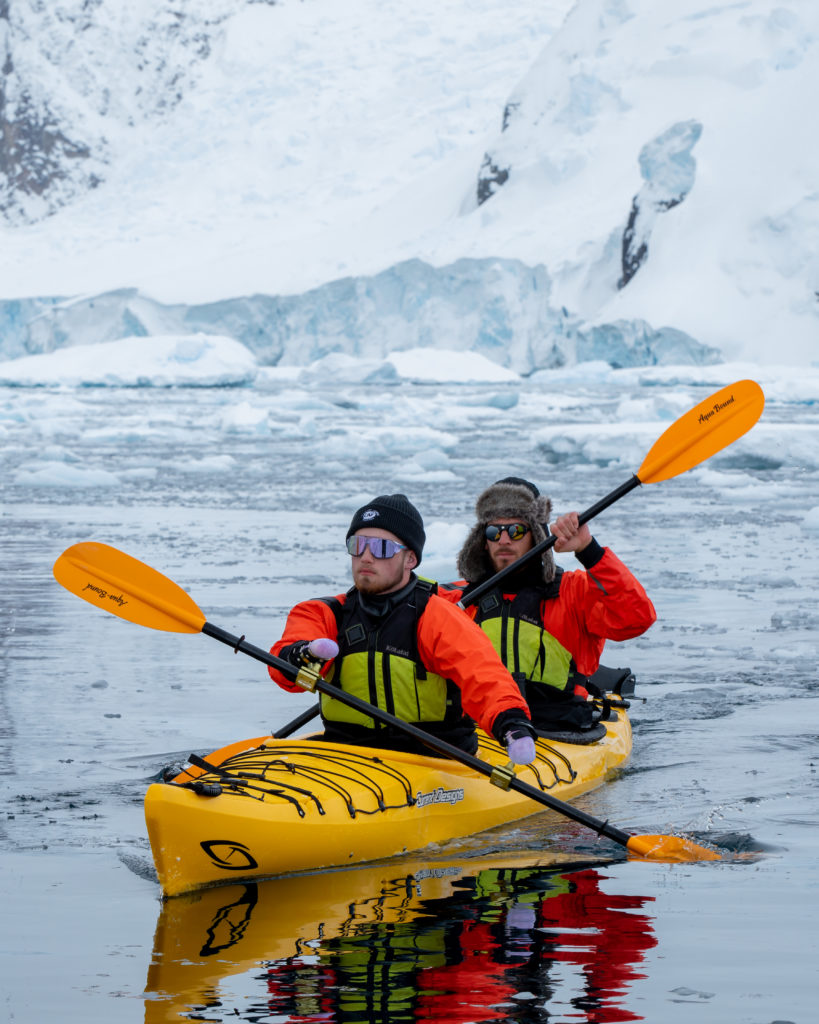 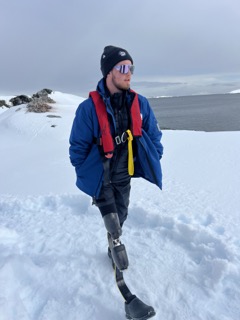 Both Roderick Sewell and Landis also took part in the expedition ship’s organized Polar Plunge, an icy jump into 30-degree sub-Antarctic waters! “We want to show people that anything is possible and this trip is a test to our limits to what we are capable of and are willing to do,” said Roderick.

Throwing a baseball in Antarctica is no easy task. Aside from being at the mercy of the extreme weather, an extensive permitting application process was necessary to ensure that the San Diego Padres starting pitcher would be authorized to throw while wearing his boots on the ice. Antarctica is an extremely fragile environment and all activities that take place there need to be approved by IAATO (International Association of Antarctica Tourism Operators), EPA (Environmental Protection Agency), and other governing bodies to ensure the future conservation and preservation of the pristine continent. The “Environmental Impact and Wildlife Risk Assessment” report took over five months to complete. Working together with the Albatros Expeditions office Drake and Musgrove submitted all the required paperwork, and the physical copy of the permit was hand carried from the Albatros office in Copenhagen to Antarctica just days before the throw. Every possible factor was considered to make sure this pitch was conducted as safely as possible. They were even asked to submit Musgrove’s height and release angle so they could calculate the exact trajectory of his four-seamed fastball. He was permitted to throw only 5 balls to set a record. 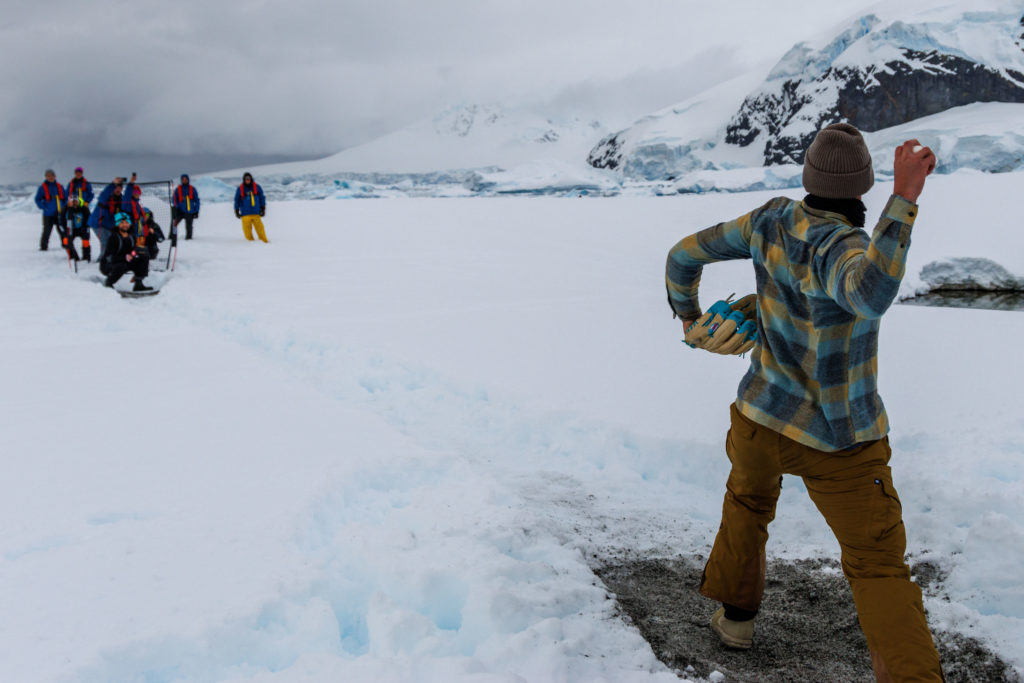 On December 4th, Musgrove’s birthday, he stood on a makeshift icy mound complete with a stunning polar backdrop of glaciers, icebergs, traveling friends and CAF athletes. After three pitches in chilly conditions of 29 (or whatever) degrees, Musgrove topped the radar gun at 86 mph… twice! Landis was included in the permit and was given authorization to throw two pitches as well. Once Musgrove had set his record at 86mph, Landis had his turn on the snowy mound. Landis fired two pitches with Joe as his catcher. The first one hit 43mph. “You’ve gotta get a 44 for me bro!” chirped Musgrove from behind the home plate drawn into the snow (referring to his jersey number). Landis wound up and fired another pitch, hitting 44mph. The bystanders, who traveled with Landis and Joe, consisted of friends and family and they began cheering loudly as the two celebrated with a heartwarming hug. The pitch is pending recognition from the Guinness Book of World Records and the team onsite collected evidence for approval. 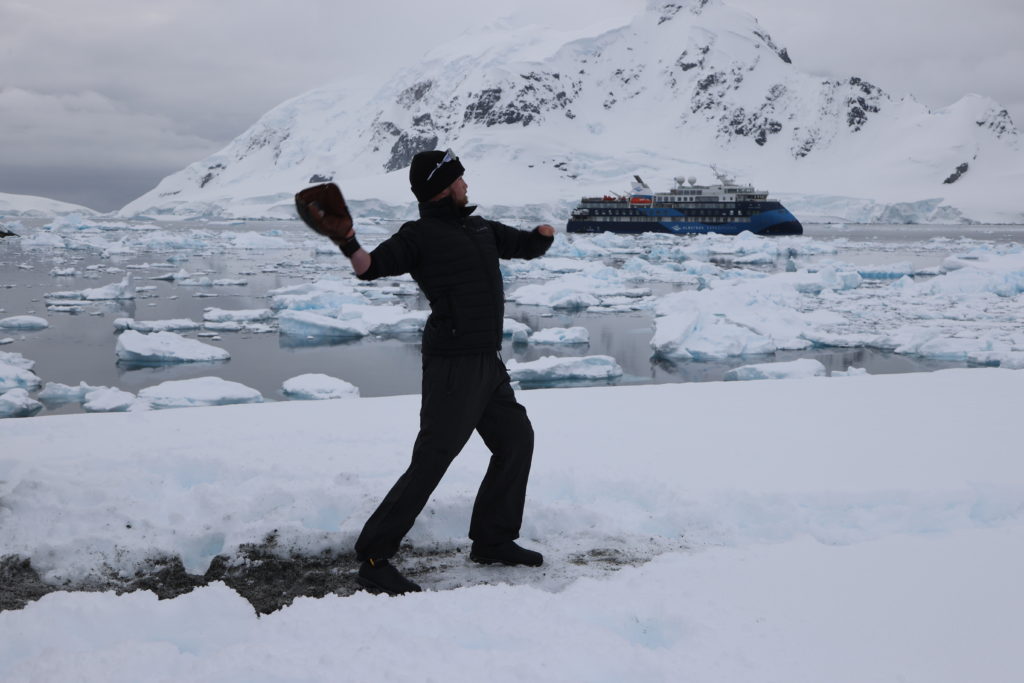 The record-setting ball will be displayed in the Baseball Hall of Fame and after an exciting auction on the ship, the second (commemorative) ball and Musgrove’s glove were auctioned to raise a combined $9,000 for Challenged Athletes Foundation.

“This trip exceeded every expectation I had. There are so many moments throughout this trip that I’ll never forget, and the group of people that we came with couldn’t have been a better collection of people. I’m just so grateful that I was given the opportunity to make a little bit of an impact.” – Musgrove said in an MLB.com interview