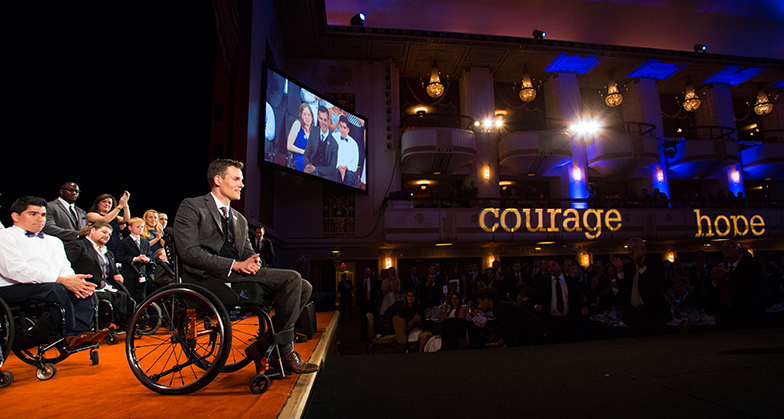 On June 8th, 2016, New York City will host the Challenged Athletes Foundation® (CAF) for the historic 10th annual A Celebration of Heroes, Heart and Hope Gala at the Waldorf Astoria New York to celebrate ‘A Decade of Difference.’
Here are the 10 things you need to know:

1. About The Event
Time and again over the past decade, the Big Apple has revealed its big heart and shone a bright light on the remarkable and inspirational physically challenged individuals who are funded by CAF. The generous contributions have empowered a dynamic new generation of athletes, and provided them with life-changing equipment, support and opportunity. Thanks to the gala and the leadership of its founder, Chairman and this year’s Honoree, Scott Stackman – over $11.2 million has been raised and distributed to deserving CAF grantees in New York, across the country and around the world.

2. The Mission
It is the mission of the Challenged Athletes Foundation® (CAF) to provide opportunities and support to people with physical challenges, so they can pursue active lifestyles through physical fitness and competitive athletics. CAF believes that involvement in sports at any level increases self-esteem, encourages independence and enhances quality of life.

3. The History
In 2005, Scott Stackman attended CAF’s Aspen Medical Products San Diego Triathlon Challenge to raise funds in his father’s memory and earned the fundraising slot to IRONMAN® World Championship in Kona. Scott is so taken by the weekend that he vows to build and start an event in New York City. In 2006 Scott completed the IRONMAN® World Championship, crossing the finish line while holding a picture of his late father, Howard high in the air. Later that year, Scott calls the Board of Directors at CAF and says, “Let’s do this!” In 2007, history is made at the inaugural A Celebration of Heroes, Heart and Hope Gala.

5. The Impact
Thanks to funds raised at CAF signature events like this one, this year, CAF distributed more than $3.7 million in grant funding to 2,098 athletes across the U.S. and in 32 countries for expensive adaptive sports equipment, training and competition expenses, that are often not covered by health insurance. In addition, more than 60,000 individuals have been reached through CAF’s other programs which provide mentoring, no-cost sport and mobility clinics and support for injured military and first responders.

6. About the 2016 Honoree – Scott L. Stackman
Scott’s vision, leadership and passion created the Challenged Athletes Foundation’s A Celebration of Heroes, Heart and Hope Gala in 2007. His journey with CAF began after the passing of his father Howard Stackman in 2004. From an early age, Scott’s parents taught him the importance and need to give back. His mother Gail has proudly been a pillar of support and together with CAF, they have built a family, a community and a new tradition of philanthropy
 that can be passed from one generation to the next.

Scott is a Managing Director at UBS Private Wealth Management, where he joined in 2008. Scott is a member of the UBS Pinnacle Council, an elite group of Private Wealth Advisors recognized for their expertise, service and successful client relationships. He earned his B.A. from the University of Maryland. Scott is an accomplished three-time IRONMAN® triathlete and has successfully competed twice in the IRONMAN® World Championship in Kona, Hawaii.

8. The Hosts
The evening will be hosted by The Today Show’s Natalie Morales and Willie Geist.

For more information, to purchase tickets or to make a donation, please visit heroesheartandhope.com. Visit challengedathletes.org to learn more about how to support the organization through unique fundraising and sponsorship opportunities.

Experience A Celebration of Heroes, Heart and Hope gala by watching the video highlight of CAF galas in 2015- https://youtu.be/3MTgfatALj8

About the Challenged Athletes Foundation
The Challenged Athletes Foundation® (CAF) is a world leader in helping people with physical challenges lead active, healthy lifestyles. CAF believes that participation in physical activity at any level increases self-esteem, encourages independence and enhances quality of life. Since 1994, more than $73 million has been raised and over 13,000 funding requests from people with physical challenges in all 50 states and dozens of countries have been satisfied. Additionally, CAF’s outreach efforts reach another 60,000 individuals each year. Whether it’s a $2,500 grant for a handcycle, helping underwrite a carbon fiber running foot not covered by insurance, or arranging enthusiastic encouragement from a mentor who has triumphed over a similar challenge, CAF’s mission is clear: give opportunities and support to those with the desire to live active, athletic lifestyles To learn more, visit challengedathletes.org or call 858- 866-0959.