On Sunday, January 14th, Bryon Solberg completed his 100th marathon on foot at the Carlsbad Marathon. 2,620 race miles throughout San Diego and all over the country. A century of marathons since his first starting line in 2002.

While an enormous feat for any athlete, Bryon’s journey comes with a unique set of challenges and therefore, an even greater sense of accomplishment.

A five-sport athlete in high school, Bryon’s passion for sports and fitness continued well into his 30’s as an avid runner, hiker and cyclist. He earned his medical degree from UCSD and had a successful career as an anesthesiologist. Then, in 1999 Bryon started experiencing coordination problems and weakness in his hands. Doctors discovered he was born without a small bone, the odontoid, that protects the C1 and C2 vertebrae from separating and putting pressure on the spinal cord. Most people with this condition die at a young age. However, Bryon survived and is believed to be the oldest survivor of the condition.

In March of 2000 Bryon had surgery to fuse the two vertebrae together and then follow-up surgery one year later. Bryon struggled physically and emotionally with his recovery, having to relearn how to walk not only once, but twice due to his surgeries.

CAF: The Game Changer in His Life 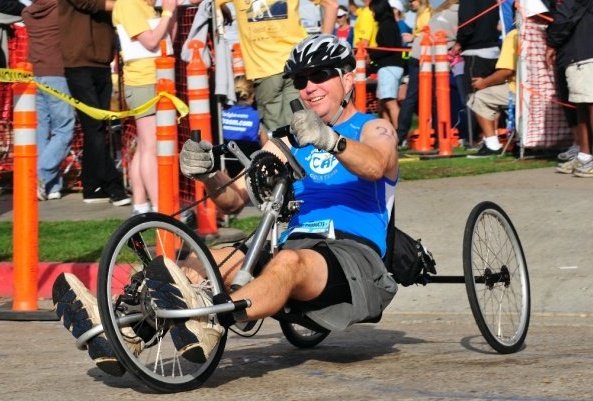 It wasn’t until Bryon attended CAF’s Aspen Medical Products San Diego Triathlon Challenge (SDTC) in 2002 that he discovered the inspiration he needed to get back on his feet.

“There was so much going on. Athletes with no limbs, people racing in wheelchairs, running. The event blew my mind and changed my world,” shared Bryon. He proceeded to pick up a course map and come back the next day to complete the 13.1 mile run-course. It took him over seven hours to finish, but he gained so much more that day.

CAF helped Bryon get out of the “cave” and ask himself important questions like, “What’s next?”, instead of, “Why me?”.

He vowed to get fit, active and live as healthy as possible to see his two boys grow to adulthood. He completed SDTC the following year and has never missed a year since.

Walking, running or cycling are now part of his everyday activities, along with the community of friendship and support it has provided. 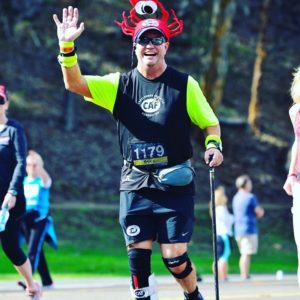 Dr. B completed his first marathon, by himself without the aid of a wheelchair, in 2002 at the San Diego Marathon (now Carlsbad Marathon). He finished close within the 8-hour time limit, yet, according to Bryon, “It did not go very well.”

“A marathon has three parts. The first 20 miles are about behaving yourself. The last .2 are supposed to be fun and the 6 in between can be a real beast,” he said.

Bryon went on to complete many marathons ““ throughout San Diego County and in seven cities around the country. His most memorable races were those completed alongside friends.

And now 16 years later, Bryon crossed the finish line of his hometown Carlsbad Marathon again, this time as his 100th marathon ever. Bryon completed the race as part of CAF and Team Chocolate Milk, a passionate community of athletes that range from world-class triathletes to weekend warriors who train and race hard, while recovering with chocolate milk. 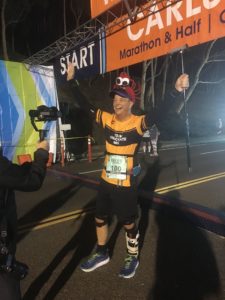 “This was a big goal and I have such respect for the 26.2-miledistance. I definitely felt someRELIEF as I approached the finish line! I was overwhelmed with emotions, mostly gratitude:for being alive, for being able to do this, and most of all, for the friends along on this journey with me,” said Bryon about how is 100th marathon felt.

Bryon has worn his signature crab hat for most organized races. It started out as a way for his family to spot him amongst the crowds and now people expect him to have it on!

Bryon’s passion for physical activity is interwoven into his passion for serving others. He has humbly volunteered countless hours for CAF and become an integral member at CAF events and within the community; always with a smile on his face.

It’s also meaningful to note that Bryon has given many of his medals away to kids at Children’s hospitals. “They are especially excited by the Rock “˜n’ Roll and Disney ones,” he notes.

Bryon is an inspiration to many others who struggle with physical challenges. “You can get off the couch and you can do it too; your health is worth it,” he said.

Huge congrats to our friend, supporter and #TeamCAF athlete, Dr. B, for reaching 100 Marathons. We can’t wait to see what’s next for him.