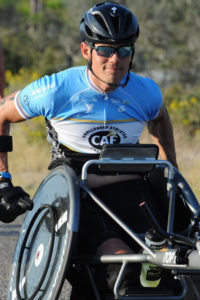 Glenn was on a routine training ride one morning in 2014 when he was involved in a cycling accident that resulted in injuries that would change his life forever. The impact instantly paralyzed him and he learned he would never walk again. While recovering in the hospital, he would sample the wheelchairs, turn on the Strava app and circle the parking lot. “It was important for me to measure my success in a different way,” he said. “Setting Strava segments in the parking lot was positive reinforcement for me to push every day.”

It didn’t take long for Glenn to get fitted for his first handcycle which he used to compete in the NYC Marathon less than a year after his accident. Strava and Zwift gave him the opportunity to monitor and measure his goals while serving as motivation for IRONMAN Florida and IRONMAN World Championship as a para-triathlete. Other accomplishments for Glenn include being a 2018 IRONMAN World Championship finisher, making it onto the cover of Runners World, and has competed in over 250 triathlons and cycling events. He is a positive, upbeat, and a glass overflowing type of person. Glenn says he owes a lot of his success to his support system, with CAF playing a large part in this.