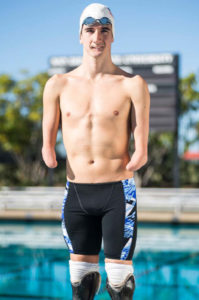 As a child, Roy played other sports and showed little interest in getting into the water until he was 12.  At age 16, he competed in his first IPC World Championships, in Durban, South Africa – winning a Gold Medal and setting a World Record in the S5 50M Butterfly and capturing a Bronze Medal in the SM5 200 IM.  Two years later, he competed in his first Paralympic Games.

After his Rio successes, Roy returned to Stanford University to complete his degree in Earth Systems.  The 2008 graduate of the Bishop’s School in La Jolla, Calif. holds virtually all American Records in the men’s S5 and SM5 classifications, as well as several breaststroke records in the SB4 category.