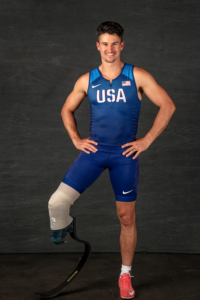 Trenten grew up in Southern California where he could be found surfing, playing soccer, and riding dirt bikes. During his freshman year of high school, he was struck by a car while riding as a passenger on his friend’s dirt bike. Ultimately, Trenten’s right leg was amputated which tested his character and shaped his future.

Under the care of his first prosthetist, he attended an Össur-sponsored running clinic for athletes and was instantly inspired. This newfound inspiration allowed him to push through his limitations and chase his dreams to pursue a career as a track and field athlete.

After a lot of experimentation with a variety of track and field events, he gravitated towards long jump which eventually led him to the Paralympics. Trenten’s many accomplishments include being a member of Team Össur, earning a spot on the Team USA Paralympic team, competing in the Rio Paralympics, and he is the current American record holder in the long jump for his classification. He is heading to Tokyo for his 2nd Paralympic games in August.