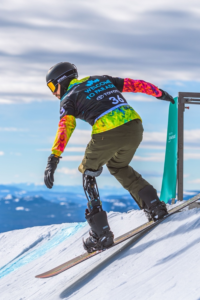 On March 11, 2011, Andre Barbieri had a terrible snowboarding accident at Mammoth Mountain which changed his life. The accident left him with an amputated leg above the knee but it transformed Andre into a new breed of athlete, who could continue to pursue an active lifestyle.

Paralympic Snowboarder Andre Barbieri Competes in the Sport that Cost Him His Leg | Independent.com