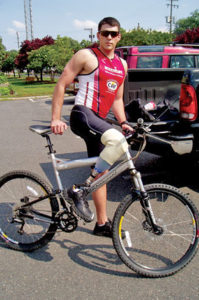 Andy Hatcher grew up in Fayetteville, NC. As a child, he excelled at sports, playing soccer, ice hockey and running track. Andy grew up in a family with a rich military tradition. His father was a career soldier and served in reconnaissance units in Vietnam. Andy naturally followed suit and enlisted in the United States Marine Corps at the age of 17.

After his initial training, Andy continued to follow in his father’s footsteps, becoming a reconnaissance Marine. In 2004, Andy deployed to Iraq as a member of the 2nd Reconnaissance Battalion, 2nd Marine Division. On Thanksgiving Day of 2004, during the second Battle of Fallujah, Andy’s vehicle was struck by an Improvised Explosive Device (IED).

The IED blast caused severe injuries to Andy’s lower right leg that ultimately led to the amputation of his right foot. Andy recovered quickly after the amputation. Just one month after his surgery, before he was even able to walk, Andy mono-skied on advanced mountain slopes. Five months after surgery, Andy rode a bicycle with a group of other injured troops from Washington, D.C. to New York City. He completed the 450 mile bike ride in seven days. Andy also just recently earned a spot on the U.S. Paralympic National Cycling Team. Andy’s resilience and positive attitude highlighted what he and other injured troops are capable of doing when given the opportunity.

“When you bounce back from losing a leg, it shows you who you are. CAF provides you with the opportunity to realize that life’s not over.”-Andy Hatcher