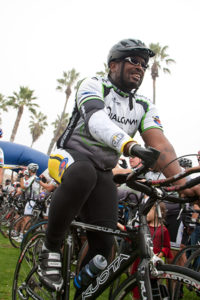 Anthony Smith was born in Columbus, Mississippi on August 30, 1966. He attended Alcorn State University in Mississippi and was commissioned a 2nd Lieutenant in the United States Army on June 12, 1990. After four years of active duty service, Anthony transferred to the Arkansas National Guard. While with the National Guard, Anthony joined the Joiner Police Department in Joiner, Arkansas and rose to the rank of Chief of Police.

On October 12, 2003, Anthony’s National Guard unit was mobilized to deploy to Iraq. In April 2004 Anthony took a direct hit from a rocket-propelled grenade. The missile went through his hip and stomach before it exploded, throwing him against a brick wall. Shrapnel took his arm. The enemy fired several rounds at his maimed body. He was put in a body bag before a nurse noticed air bubbles oozing through the blood.

Anthony was in a coma for 62 days and only recently regained most of his memory. He lost his right arm below the elbow and walked with the aid of crutches. He underwent dozens of surgeries and learned to write and throw a ball to his child with his left hand.

In July 2008, Anthony joined the CAF Operation Rebound team with the goal of competing in triathlon and long-distance cycling. Since that time, he competed in a number of sprint and half-distance triathlons and has twice completed a 620 mile bike ride down the California coast. Anthony is also a martial arts black belt and has opened his own martial arts studio. He is currently training for the U.S. Paralympic Tae Kwan Do team that will debut at the 2021 Tokyo Paralympics.

“Before being introduced to CAF I was 310 lbs. and restricted to an automatic wheelchair. Since then I’ve lost 80lbs., have earned my Black Belt in Ta Kwon Do and have opened my own martial arts studio. CAF Operation Rebound has truly changed my life.” – Anthony Smith.

Your generosity and support gives Anthony the opportunity to reach his goals and experience the healing power of sports.