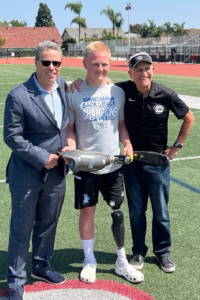 Carson Fox was playing football for Los Alamitos High school his freshman year when he went in to long snap for the first football game and had a kid land on his ankle, breaking it. Carson had it casted and went to see the orthopedic surgeon. When Carson mentioned that his hamstring/knee area had been hurting, the doctor ordered an MRI which showed a tumor. Carson was diagnosed with Telangiectatic Osteosarcoma in April 2021.

After a round of chemotherapy, Carson’s tumor grew. He had to make the decision to have his left leg amputated above the knee in May of 2021. After playing sports his entire life, Carson is anxious to get out on the field and play again for his high school baseball and football teams had has a goal of playing with both teams next year. While he doesn’t have any experience with adaptive sports yet, he’s highly motivated to learn and try new things – like track.

Carson loves being on a team and competing to win. He has always had a lot of energy since he was little, and sports has given him the outlet to expend some of that energy. During chemotherapy, Carson has continued to work out and lift weights in hopes of playing again. Sports really has been the center of his life. With this grant, Carson will be able to participate again and would be a step closer to being his old self.

He lost his leg to cancer. What he did not lose is his desire to compete | ABC7