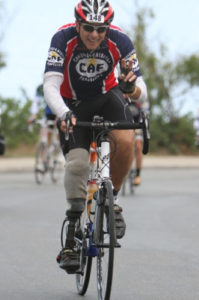 Dan grew up in Chicopee, MA. Upon high school graduation, Dan attended a small Massachusetts college where he played quarterback for two years on the school’s football team.

After leaving college in 1968, Dan was drafted into the United States Army sent to Vietnam as an infantryman. Soon after his arrival in Southeast Asia, Dan lost his right leg below-the-knee to an enemy mine while on patrol in the dense jungles of South Vietnam.

After retiring from the Army, Dan found it difficult to find a support network for fellow injured service members. He became a teacher and in the early 1990s began cycling and mountain climbing.
In 2009, Dan became a member of CAF Operation Rebound. He now has a vast network of fellow injured service members whom he stays in contact with and trains with. He has also become a mentor for newly injured troops returning from the current conflicts.

“CAF Operation Rebound has helped keep me motivated through the struggle of being an amputee.”-Dan Oakland

The generosity of supporters like you has given Dan the opportunity to continue cycling and supporting our newly injured veterans as a member of the CAF Operation Rebound team.