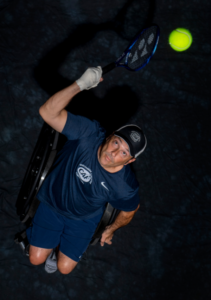 David Wagner grew up playing basketball and tennis in Washington. He became a quadriplegic at the age of 21 when he attempted to jump a wave while playing Frisbee on the beach. The wave caught his feet and spun him, forcing him head-first into the sand.

Although walking was out of the question, Wagner picked up a table tennis paddle in rehab which eventually reignited his love for tennis. By 28, David was the number one ranked USA tennis player; he would go on to four consecutive Paralympic showings, bringing home 8 total medals – 3 gold, 3 silver, and 2 bronze.