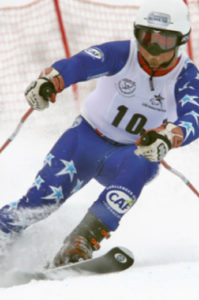 Joel Hunt joined the Army in 1998 and deployed three times to Iraq. During his combat tours, Joel served as an explosive ordnance disposal technician and a vehicle top-gunner. He was responsible for protecting his fellow soldiers while on patrols and convoy movements. During each deployment, Joel was exposed to enemy gunfire and numerous IED blasts from which he sustained repeated traumatic brain injuries, vision impairment and left leg paralysis. Though injured several times, Joel continued to volunteer for dangerous duty so that others could remain out of harm’s way.

Joel dedicates his time to supporting his fellow injured service members. He conducts outreach and coordinates events for their benefit throughout Denver, CO. Joel’s ultimate goal is to compete internationally as a member of the U.S. Paralympic ski team.

“In 2007 I was in a wheelchair and on 15 different medications for injuries I sustained in Iraq. Today, because of Operation Rebound, I am out of my chair, use just 3 medications and ski regularly. Operation Rebound doesn’t just make dreams come true, it’s been a critical part of my rehabilitation.”-Joel Hunt

Your generosity and support gives Joel the opportunity to reach the pinnacle of his sport.