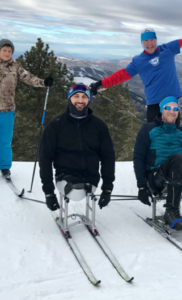 Josh Sweeney grew up playing competitive sports, however his favorite was hockey, which he played throughout high school. Josh served in the military in the Marine Corps as a Sergeant. In October of 2009, he stepped on an improvised explosive device (IED) while serving in Nowzad, Afghanistan and as a result, he became a bilateral amputee.

During his rehabilitation, Josh was introduced to adaptive sled-hockey and was immediately hooked. He went on to play for the San Antonio Rampage, a club sled hockey team as well as a three-time U.S. National Sled Hockey team member and captain. He currently competes in Nordic skiing, enjoys wheelchair basketball and cycling.