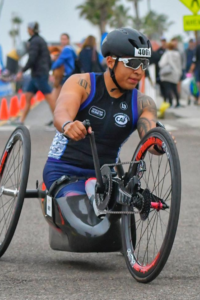 Josue Barron grew up in Los Angeles as middle child of 7 kids raised by single mother. He joined a gang at age 14. On his 18th birthday in 2007, Josue sought to better himself and joined the Marine Corps.

On 21 Oct 2010, Josue lost leg and eye to IED blast while on patrol in Afghanistan while serving with the famed 3rd Battalion, 5th Marine Regiment “Darkhorse Battalion”. In 2012, Josue was introduced to CAF Operation Rebound while rehabilitating at the San Diego Naval Hospital. He played for the hospital’s Wolfpack Wheelchair basketball team. CAF Operation Rebound supported Josue and his teammates to play in wheelchair basketball tournaments.

Recently, Josue took up handcycling with the goal of competing at the Paralympic level. CAF Operation Rebound has funded his handcycling coaching and some of his equipment. He just did his first Ironman event and now also has an interest in competing in triathlon.