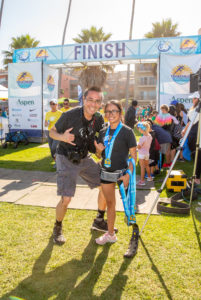 Kaela was diagnosed with osteosarcoma in January 2007, she had an above the knee amputation on her left leg in May of 2007. She has been Cancer free since. Her family was introduced to the Challenged Athlete’s Foundation shortly after her surgery 2007. In 2011, she was awarded a running leg at the Heroes Heart and Hope Gala in New York that changed her outlook on life.

Kaela’s involvement with CAF has given her a sense of empowerment that comes from building self-esteem and gaining independence. She has persevered and succeeded under circumstances on a level that most people can only imagine. She is a regular speaker at Princeton University for pediatric cancer awareness and for a few other foundations. She took part in an adaptive surfing clinic sponsored by the Junior Seau Foundation and has participated in the San Diego Triathlon Challenge, swimming a mile in La Jolla Cove.

She was a member of the North Jersey Navigators, an adaptive sports team for junior athletes with disabilities. As a Para Triathlete in training, she competes at the Westchester Super Sprint Triathlon event in Rye Playland as a member of Team CAF. Through the years, Kaela discovered track and field and swimming, making it to the Jr National Championships and earning 10 gold and 2 silver medals. Now, a college student, Kaela remains active, athletic, and motivated to enjoy her life to the fullest.