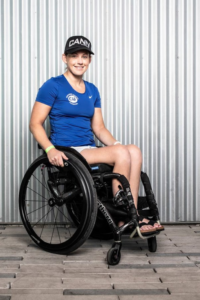 Australia’s Lauren Parker, once an elite able-bodied triathlete will now travel to Tokyo to compete in Para-Triathlon in the Paralympics.

In 2017, Lauren was training in preparation for the Ironman Australia Triathlon and while on her bike, her tires blew out and she was thrown into railing at nearly 40km/hr. As a result, Lauren became a PTWC paraplegic. However, her accident did not stop her from competing in triathlon, as she quickly transitioned to para-triathlon.

She was first introduced to Challenged Athletes Foundation when she attended the San Diego Triathlon and received a grant for a new handcycle in 2018. She recently competed in the 2020 Paralympic Games in Tokyo and won a silver medal!