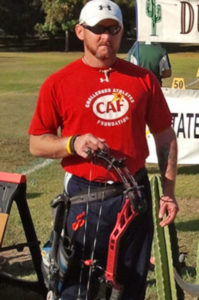 In 1970, Mark was born into a military family in Rota, Spain. Mark grew up an avid bow hunter and admirer of the military. In 1994, he followed his father’s footsteps and joined the Army, serving a three- year term.

After the 9-11 attacks, Mark rejoined the Army Reserve. In May 2004, while serving in Iraq, Mark was hit in the face by enemy fire. Shrapnel penetrating Mark’s goggles destroyed his left eye and caused near complete blindness in his right.

After nearly four years of rehabilitation Mark began training with his bow again. In April 2009, Mark participated in his first blind archery competition in April 2009 and finished second. Soon thereafter, Mark was regularly winning Gold at various archery competitions around the country. Due to Mark’s determination, he was noticed by U.S.A. Archery coaches and was selected to compete as a U.S.A. Archery athlete. Mark is one of three visually impaired archers in the United States.