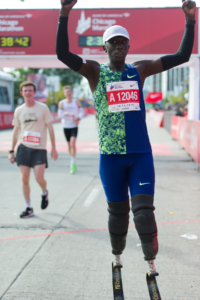 Marko Cheseto is a Kenyan long-distance runner who competed on the track for University of Alaska. In 2011, Marko went missing in a blizzard only to be found 56 hours later. He suffered from hypothermia and severe frostbite resulting in the amputation of both feet.

In 2013, he was presented with his first pair of Össur running prosthetics and he ran the New York City Marathon in under 3 hours. Last October, he raced a world record 2:37:23 at the Chicago Marathon. His perseverance and exceptional athletic conditioning has allowed him to achieve extraordinary levels of success in sport.