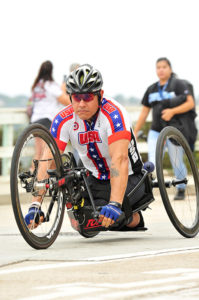 Oz Sanchez was born and raised in Los Angeles, CA. He joined the Marine Corps in 1996 and became a Reconnaissance Marine. After five years in the Marines, Oz decided to transfer to the Navy to serve as a Navy SEAL. In July 2001, during his transfer between branches, Oz was involved in a motorcycle accident that resulted in a spinal cord injury and the inevitable paralysis and neurological complications associated with it.

After the accident, Oz’s biggest fear was being defined by his injury. As a result, he developed a new sense of direction and vigor for life. He pulled out of his post-injury depression and once again took a proactive approach to living by dedicating himself to education and handcycling.

Oz recently graduated from San Diego State University with a business degree and a minor in public communications and plans to return to school for a masters degree in exercise science.

Oz is also an elite hand cycle racer. He currently holds “Elite Athlete” status after competing in five World Championship events. Oz won gold medals in the men’s hand cycle at the 2008 and 2012 Paralympic Games and is a five-time World Hand Cycling Champion which has earned him the title of “world’s fastest hand cyclist”.

“Without the support that Operation Rebound provided me in preparation for the 2008 Paralympic Games in Beijing, I would NOT have returned from Beijing a Gold medalist, period!” –Oz Sanchez