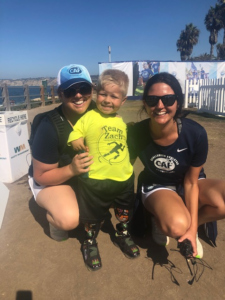 Zach is an almost 8 year old boy who was born with a rare syndrome called TAR syndrome (thrombocytopenia absent radii) which was a big shock to his parents. They were told he was healthy with no abnormalities throughout the entire pregnancy.

Zach’s platelets were very low when he was born so he required many blood and platelet transfusions in the NICU and through his first few years of life. His lower extremities were bent at the knees and his parents were told by 30 different orthopedic surgeons from all over the world that the decision was either a. 20+ surgeries to straighten his legs but have him not able to bend since he was born with no knee joints or b. to amputate his legs above the knee and hope that one day he would be able to walk with prosthetics.

Zach was amputated at 18 months old. Three days later he tried to walk on his stumps and climb the stairs!

Zach has walked on prosthetics since before he was 2 years old. He recently received his first set of prosthetics with knees and is working with PT to improve and practice using them. He received a pair of Össur Flex-run Junior running feet from CAF in March of 2018 and was able to play on his first soccer team because of them. He also swims on a swim team and plays baseball. He’s now in 2nd grade and loves his teacher and his friends he has made at his new school since moving to Texas in December 2020.

The Power of a Yellow Shirt: Team Zach’s Story